All six passengers were airlifted to Pomona Valley Medical Center, Sheriff Alex Villanueva told The Los Angeles Times. One of the passengers is in critical condition, two are in moderate condition and two others have minor injuries, he said.

The Times reported that five of the passengers on the Air Rescue 5 helicopter were deputies with the Sheriff’s Department, and the sixth was a doctor from UCLA.

The passengers suffered a variety of injuries, including fractures and broken ribs.

“They are in stable condition, some more banged up than others, but thankful to be alive,” Villanueva told the Times. The fact that there were no fatalities “is nothing short of a miracle.”

The crash occurred at 4:58 p.m. near the San Gabriel Reservoir, which is near Highway 39 and East Fork Road near Azusa.

The Times reported that the green Air Rescue 5 helicopter was responding to a call for service in the area at the time of the crash. The San Dimas station received a call that a helicopter went down at 4:58 p.m., the sheriff’s department said.

The damaged aircraft is now lying on its side in Azusa Canyon near the San Gabriel Dam. Multiple emergency vehicles are at the scene.

The rescue helicopter makes hundreds of flights annually into some of the toughest terrain, often flying into narrow canyons and dealing with difficult topography.

The helicopter crew has “saved thousands of lives over the years,” Villanueva told the Times.

The National Transportation Safety Board has launched an investigation into the crash, spokesman Eric Weiss said. 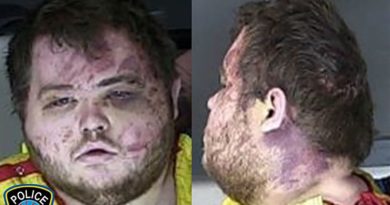