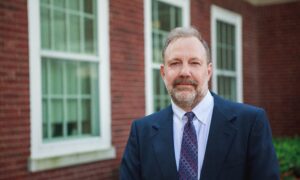 A federal appeals court on Friday reversed a lower court decision, ruling that an Ohio professor’s First Amendment rights may have been violated when his university tried forcing him to refer to a biological male student using female pronouns.

A panel on the 6th U.S. Circuit Court of Appeals said philosophy professor Nicholas Meriwether “has plausibly alleged that Shawnee State violated his First Amendment rights by compelling his speech or silence and casting a pall of orthodoxy over the classroom.”

Shawnee State University, in Ohio, has employed Meriwether for 25 years.

The case centers around a 2016 rule change that saw the school require faculty that they had to refer to students by their “preferred pronoun[s].”

When Meriwether, a Christian, sought clarification on the rule, a university official claimed that Christians are “primarily motivated our of fear” and should be “banned from teaching courses regarding that religion.” She also said she thought even the “presence of religion in higher education is counterproductive.”

Two years later, on the first day of his class, Meriwether was using the Socratic method to lead a discussion and addressed, as he normally does, students using gender references like “Mr.” He called one person “sir,” not knowing the biological male identifies as a female.

After class, the individual approached Meriwether and demanded the professor refer to him as a her and use feminine titles and pronouns. Meriwether said he wasn’t sure he could and was threatened in response, according to court filings.

The situation escalated as various officials got involved. The professor’s attempt to reach a compromise—he offered to use the preferred pronoun, but would place a disclaimer in his syllabus noting that he was doing so under compulsion—was rejected, and he was ultimately reprimanded, receiving a written warning. A union appeal failed, dismissed by Provost Jeffrey Bauer, who allegedly “openly laughed” when the union representative tried explaining why Meriwether felt conflicted because of his faith.

Circuit Judge Amul Thapar, a George W. Bush nominee, writing for the appeals court panel, said that not only has the professor plausibly alleged a First Amendment violation, it violated his religious rights guaranteed in the Free Exercise Clause.

Officials at the university exhibited hostility to Meriwether’s religious beliefs and there were “irregularities in the university’s adjudication and investigation processes permit a plausible inference of non-neutrality,” Thapar wrote.

The panel also affirmed the lower court’s ruling in several other claims that the professor had made.

The case was remanded to the lower court with instructions to conduct further proceedings consistent with the new ruling.

Shawnee State didn’t respond to a request for comment.

John Bursch, senior counsel for the Alliance Defending Freedom, who represented Meriwether, said in a statement that “nobody should be forced to contradict their core beliefs just to keep their job.”

“We are very pleased that the 6th Circuit affirmed the constitutional right of public university professors to speak and lead discussions, even on hotly contested issues. The freedoms of speech and religion must be vigorously protected if universities are to remain places where ideas can be debated and learning can take place,” he added.