‘There are people all over the country … sending each other formula they can find.’

Jessica Johnson of Superior, Wisconsin, recently traveled to six different stores, crossing over into Duluth, Minnesota, in search of baby formula. When she returned home, she posted photos of empty shelves from different stores on social media.

“The day I posted that, my mom, dad, and I all got in the car and went on a search for my daughter’s formula,” Johnson told The Epoch Times. “She’s on a specific formula for sensitive stomachs. She has reflux and an allergy.”

Johnson is one of thousands of parents across the country struggling to find formula for her baby amid a nationwide shortage that’s led to empty shelves and growing panic.

Johnson said she did breastfeed for about a month when her daughter was first born, but the baby’s digestive system was even too sensitive for that.

“There are a lot of moms that can’t find Nutrimigen, which is for babies who have allergies,” she said. “That one is really hard to find. ”

“The baby formula recall in February didn’t help,” Johnson added, referring to a recall of Similac, Alimentum, and EleCare powdered infant formulas produced at a factory in Sturgis, Michigan. “When I’m getting down to the last container, my parents would usually find it at the local Sam’s Club. But it’s hardly there anymore. We went to six different stores. It’s so scary and so daunting we literally couldn’t find it.”

Retailers have begun rationing baby formula and limiting the number formula purchases each customer can acquire at one time. Some parents are so desperate when faced with empty shelves at grocery stores that they’ve resorted to snatching cans of formula out of other people’s shopping carts. As frantic parents have begun to seek alternatives, one pediatrician in Ohio issued a plea to desperate parents, begging them not to try to make their own baby formula.

One silver lining Johnson has found through the dark cloud of the formula shortage is seeing how many people reached out to others through her social media post, which has so far received over 8,500 comments and 33,000 shares.

“A lot of the posts were from people trying to help others,” she said. “Some offered to buy formula in their area and to ship it to those who needed it. Others offered to donate from their own supply. My mom reached out to one of the moms whose baby was really sick. They can’t find it and had to give their baby a different formula. My mom was able to find some locally and she is going to ship it to them. There are people all over the country and on that post helping each other and sending each other formula they can find.”

Jessica Routh of Parsons, Kansas, has been struggling for the past month to find formula.

“My son was born premature, so he’s been using the NeoSure Similac formula,” Routh told The Epoch Times, adding that she’s had to go two hours away to find the brand. She even had family members from Missouri try to locate cans in their area and ship it to her.

“For the past couple weeks, none of the stores in the area or the surrounding areas has it,” she said. “I found they have it on Amazon but they are currently out so I can’t order any more there. I’ve tried the different off-brands they have at Sam’s [Club]. I’ve also tried the Advanced Similac but that’s not available at all. Each time I used Similac, it made my son sick to his stomach.”

Out of desperation, Routh has considered trying to “slowly introduce milk into his diet” earlier than recommended. “He’s 11 months old. They don’t recommend before one year. Because he was premature, he’s really in the 10-month range.”

“I’m only finding liquid here and the liquid is only a good idea if your baby eats a lot because it’s bad by the next day,” Riley told The Epoch Times. “I breastfeed and bottle feed because I work, and I don’t always make enough breastmilk.” She also said the panic attacks she suffers through on the way to the store for formula are outdone only by the ones she has getting into the store to find empty shelves.

“I sometimes cry myself to sleep because I feel so bad for all these moms out here,” Riley lamented. “With prices going up this is definitely the last thing us moms need to worry about.”

Kelly Battistoni of Depew, New York, has been struggling for the past few months to restock her baby’s formula. Like so many others, Battistoni depends on assistance from WIC, a supplemental nutrition program, but the program only covers a certain number of cans.

She said paying for the majority of her cans out of pocket has only added to the stress she already feels about whether she’ll even be able to find them. When stores in her area get a shipment of formula, they are “completely bought out the same day.” She said a friend offered to help by ordering formula through her Costco account, but when they went online, the website said they were sold out. Now her friend is also struggling.

“It seems like everyone is in need of the same brand,” Battistoni noted. “We even had to settle for a Target off-brand that’s supposed to be the same as Enfamil. Hopefully it doesn’t upset her stomach. Not every mother has the ability to breast feed. The guilt we feel is enough. Now we have the added anxiety of wondering how we’re going to be able to feed our baby.”

Out of desperation, Battistoni reached out to friends on social media, asking if anyone knew where she could find Enfamil Gentlease.

“I got an enormous amount of support and help,” she said. “We are blessed to have support in this area. Moms have gotten together to help one another to get through this and to help our babies stay fed. We’re all just wondering when this stress is going to end.”

“I probably spend about an hour a day, every day, looking to see if anyone has baby formula in stock, and they don’t, and I can’t seem to get answers from anywhere,” Owens told The Epoch Times. “I just read an article where they’re sending formula to the border. So I spend every day looking for baby formula and I can’t find it and I can’t get an answer on why we can’t find it. My baby is 6 months old, so she can’t have baby food, so we rely 100 percent on formula. I spend about 10 hours a week online trying to find out who has restocked.

“It’s hit a point now where I can’t even order it online, so when are we going to get it? I hit the middle of a container and I’m thinking, ‘This is only going to last me two more days. What am I going to do?’ We go through a can a week. I’m down to one can. What am I going to do when we open this last can? I have family members all over the state and they’re telling me they can’t find it. What do we do?”

Crystal Faber of Kingman, Arizona, said she hasn’t felt the panic from empty shelves yet, and she hopes it won’t come to that.

“I really haven’t experienced the shortage,” Faber told The Epoch Times, adding that she was able to get the last can of Parent’s Choice Gentle Powder Baby Formula at her local Walmart last week. However, she confessed she will be needing more soon. “I hope I don’t have to experience what others are experiencing. Last week, as I was pulling into Walmart in Kingman, Arizona, it was the first time I heard over the radio that there is a national formula shortage. I just thought to myself, ‘Oh geez. I hope there’s formula when I go in!’ To my surprise the shelves did look pretty empty already. But fortunately, there was one can of the formula that I use for my little one. I haven’t had to get more since, but I hope when I do there will be some available.”

According to Walmart’s website, Parent’s Choice Gentle Powder Baby Formula was out of stock as of May 12.

“It really is hard for all of us new moms who can’t breastfeed,” Faber empathized. “I’m at complete loss for words and I hope this ends soon so myself and other mommies won’t have to go through this anymore.”

Patricia Tolson, an award-winning political columnist and investigative reporter with 20 years of experience, has worked for such news outlets as Yahoo!, U.S. News, and The Tampa Free Press. With The Epoch Times, Patricia’s in-depth investigative coverage of elections, education, school boards, parents’ rights, and COVID-19 mandates has achieved international exposure. Send her your story ideas: patricia.tolson@epochtimes.us

Ways to Make Money on Amazon 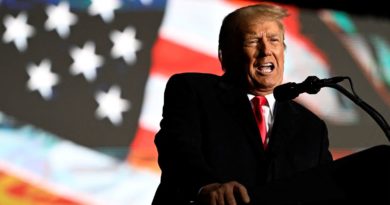 Goodbye Donald, hello Ron? What polls are saying about Trump vs DeSantis | US News