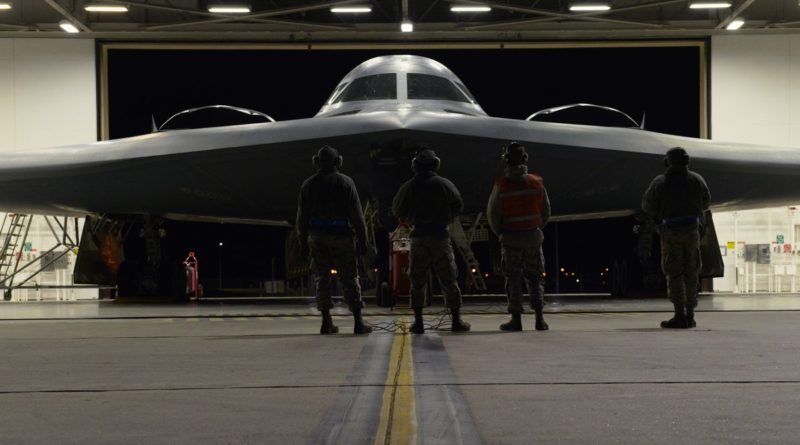 
A U.S. Air Force B-2 stealth bomber sustained damage on Dec. 10 after a fire broke out following an emergency landing at Missouri’s Whiteman Air Force Base (AFB), officials say, noting that nobody was injured in the mishap.

In a statement to the War Zone, a spokesperson from the 509th Bomb Wing said the heavy strategic bomber, which is capable of carrying nuclear weapons, “experienced an in-flight malfunction” during a routine exercise.

“A U.S. Air Force B-2 Spirit … was damaged on the runway at Whiteman Air Force Base after it successfully completed an emergency landing,” the unidentified spokesperson told the publication.

“There were no personnel injuries,” the official added. “There was a fire associated with the aircraft after landing, and the base fire department extinguished the fire.”

Whiteman AFB is the current home of 20 B-2 stealth bombers. The base is located in western Missouri, just south of the city of Knob Noster in Johnson County.

Last month, the base released a video that showcased the capabilities of the aircraft and airmen who operate it. The clip was based on the “Spirit Vigilance” exercise, which bomb wings across the U.S. Air Force perform multiple times a year. The exercises are designed to enhance the readiness and lethality of all pilots involved in the bomber mission.

“We’re the only aircraft out there that combines stealth with precision payloads [and] long-range strike. Nobody else can do that,” said Lt. Col. Geoffrey Stevens, commander of the 509th Bomb Wing.

Initially, the B-2 Spirit bomber was envisioned to be a fleet of more than 100 aircraft, but the U.S. Air Force built only 21 due to cost overruns and a changed security environment after the Soviet Union fell.

The latest B-2 mishap happened just weeks after the Pentagon debuted its newest nuclear stealth bomber, the B-21 Raider, after years of secret development. It is the first new American bomber aircraft in more than 30 years.

As evening fell over the Air Force’s Plant 42 in Palmdale, California, on Dec. 2, the public got its first glimpse of the B-21 Raider in a tightly controlled ceremony. It started with a flyover of the three bombers still in service: the B-52 Stratofortress, the B-1 Lancer, and the B-2 Spirit. Then the hangar doors slowly opened and the B-21 was towed partially out of the building.

“This isn’t just another airplane,” Defense Secretary Lloyd Austin said. “It’s the embodiment of America’s determination to defend the republic that we all love.”

The B-21 is part of the Pentagon’s efforts to modernize all three legs of its nuclear triad, which includes silo-launched nuclear ballistic missiles and submarine-launched warheads, as it shifts from the counterterrorism campaigns of recent decades to meet China’s rapid military modernization.

While the B-21 Raider may resemble the B-2 Spirit, once you get inside, the similarities stop, said Kathy Warden, chief executive of Northrop Grumman Corp., which is building the bomber.

“The way it operates internally is extremely advanced compared to the B-2, because the technology has evolved so much in terms of the computing capability that we can now embed in the software of the B-21,” Warden said.