Department of Justice lawyers late Wednesday asked the Supreme Court to hear a case involving the “Remain in Mexico” program.

The policy was started during the Trump administration and forces many asylum seekers to wait in Mexico while their claims are heard.

The Biden administration ended it but was ordered by a judge over the summer to relaunch it. The judge said Homeland Security Secretary Alejandro Mayorkas didn’t adequately consider the benefits of the program, which included deterring some would-be illegal immigrants from entering the United States.

Mayorkas came up with a new memorandum in October attempting to end the program again, but an appeals court upheld the judge’s ruling, asserting the memo didn’t affect the ongoing case because it “simply reaffirmed the termination decision that the states had been challenging all along.”

Biden administration lawyers in the filing Wednesday told the Supreme Court that decision was made in error. The administration wants the nation’s top court to hear arguments from both sides and rule on the matter.

“The court of appeals’ decision has enormous legal and practical consequences, and there are compelling reasons for the court to review it promptly,” they wrote in a 45-page writ of certiorari.

One argument put forth—that the lower courts “improperly dictated the exercise of the executive’s statutory discretion.”

“By requiring the executive to engage in ongoing negotiations with a foreign sovereign over the contours of a border-wide immigration program, the lower courts effected a major and ‘unwarranted judicial interference in the conduct of foreign policy’ and executive prerogative,” the Biden administration said.

“Remain in Mexico” relies upon the Mexican government agreeing to allow the United States to move asylum seekers into Mexico.

After months of negotiations, the two countries reached a compromise on Dec. 2 to reboot the program.

If the Supreme Court doesn’t step in, the policy will stay in place unless Mexican officials stop cooperating or Congress approves funding to detain all the illegal immigrants that enter the United States, Biden administration lawyers said.

U.S. District Judge Matthew Kacsmaryk, a Trump nominee, found in August that federal law mandates immigration officers detain all illegal aliens unless there is no doubt that they are entitled to be admitted into the country.

Without “Remain in Mexico,” the government is “forced to release and parole aliens into the United States because defendants simply do not have the resources to detain aliens as mandated by statute,” he said. 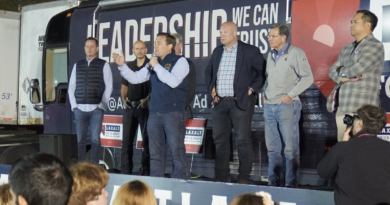 Before a Red Horizon, Republicans Rally for Nevada’s Laxalt