ORANGE, Calif.—The CalOptima Board of Directors voted April 13 to give $50 million to Orange County’s community health centers over the next five years, the largest grant in the agency’s history.

Known as the Population Health and Value-Based Care Transformation grant, it will enhance access to healthcare for individuals in Orange County regardless of their insurance status or ability to pay.

“As the backbone of the county’s safety net, community health centers provide essential care to underserved populations that often have the most complex needs and least resources,” CalOptima Chief Executive Officer Michael Hunn said in a statement. “This critical funding will support the goal of providing value-based care for more than a quarter-million CalOptima members and others who are among the most vulnerable.”

The funding will be specifically given to the Coalition of Orange County Community Health Centers, a membership organization that includes 26 of 29 community health centers in the county, where they will be able to design an implementation plan based around health centers that will work to improve patient experience.

Specifically, the record-level grant will support new improvements including:

• Establishing medical homes for select populations, including the homeless
• Improving timely access to and coordination of care, including care that will support individuals returning to the workforce
• Reducing avoidable hospitalizations and hospital readmissions
• Participating in a health information exchange and data interoperability
• Improving the quality of the centers’ systems, processes, and overall performance
“At CalOptima, we’re transforming the way Medi-Cal patients receive care—setting the standard for health care across the country,” Andrew Do, Orange County supervisor and chair of the CalOptima Board of Directors, said in a statement. “In Orange County, these health centers reflect the communities they serve and provide care for more than 250,000 CalOptima members.”

The funds will begin to be distributed immediately and will occur annually for the next five years as long as performance targets are met.

CalOptima was formed in 1993 by the Orange County Board of Supervisors, later on becoming the largest health insurer in the county, where they provide health services for low-income families, children, and seniors.

US wildfires: ‘With the state of the forests, there is literally no stopping this blaze’, says California firefighter | US News 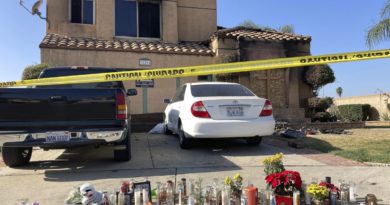 Deputy in California Slayings Killed Self With Service Gun