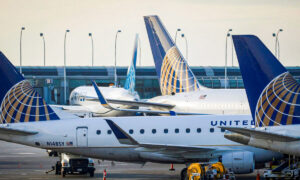 Masking up while traveling is now optional. The change has been met with cheers—and also concerns. What does the new ruling mean for you?
Twenty-three on the FBI’s terror watchlist were caught illegally entering the United States. Those crossing the southern border are coming from countries all around the world, prompting the question: who is entering our country and is America less safe because of it? Former Texas Congressman and retired Lt. Col. Allen West joins us to discuss.
The White House, feeling the heat for expanding oil and gas leasing on federal lands, is now desperate to message that they’re still dedicated to a climate change agenda. The administration on Tuesday restored environmental regulations that were relaxed under former President Donald Trump.
…