As Barclay McGain walked into the campus of the University of Queensland (UQ), the lack of diversity in political clubs caught his attention.

Meanwhile, on the right, there’s the UQ Liberal National Society, which McGain argued is “not conservative” in his opinion.

There’s also the UQ Monarchist League, one of Australia’s largest conservative clubs, of which McGain’s the president. He said the club “wasn’t going to be started if we wanted to call it the UQ conservative club” because its values “don’t align with the student administration.”

But this is only the outset of an ideological battle that has been taking place at university campus for the past five decades, a battle that students holding conservative values like McGain realise will make their voices in the minority.

According to a 2020 research carried out by the American-based Heterodox Academy based on data for three campus constituencies, left-wing views are “considerably overrepresented” on university campuses, with “60 percent of the faculty identified as either far left or liberal compared to just 12 percent being conservative or far right.” In 1989, the progressive: conservative ratio of faculty was 2.3, and in less than 30 years this ratio had more than doubled to 5.

A similar pattern could be found at Australia’s university faculty.

“There are a lot of students which are notionally conservative or classical liberal; they just feel like they’re unable to show it,” McGain, a former chairman of the Gold Coast young LNP branch, told The Epoch Times.

“You’re in the minority. And you just think, well, is this a battle worth fighting? Am I going to lose friends over this? But I think the harsh reality is that the antidote to cancel culture is just courage.”

An economics student, McGain argued, “one of the most important debates that should be had within economics is the role of government in the market.” However, economics subjects at his university “completely omit to talking about Friedrick Hayek and the principles of classical liberalism, like Milton Friedman and Ludwig von Mises.”

This is in favour of Keynesian economics, McGain said, which promotes active state intervention and regulation of the economy through finance, and Marxist economics, which advocates the abolition of private property and ascendance of state ownership.

Critics of socialist economics often argue that extensive government intervention weakens private enterprises and is incapable of resolving the root causes of poverty, unlike free-market regulation, while the system of state ownership promoted by Marx brings about starvation, which was seen in the Soviet Unions, China, Cambodia and North Korea.

“The fact that Marx is still talked about in an economics class,” McGain continued, “I mean, sure, it’s great to have discussions about him, but to frame it as the two ideologies, I think it’s a deliberate misrepresentation.”

In an email, a UQ spokesperson told The Epoch Times “freedom of speech is an underlying principle” for the university.

“Our Vice-Chancellor has said ‘freedom of speech goes to the absolute core of what defines universities,’” the spokesperson said.

But McGain argued that the pressure to conform felt by conservative students comes from the progressive bias and political correctness infiltrating the curriculum, as well as the “guilt by association” that has “permeated throughout society.”

“The curriculum is not really teaching students how to think but more so what to think,” McGain added. “In academic writing, there’s the policing of things like gendered language in your essays. For instance, if they say the ‘Founding Fathers’ in the United States, they get marked down for using gendered language. That’s happened to a number of people.

“You also can’t say the word Aboriginal; you have to refer to them as First Nations peoples. But it really is, I guess, at the discretion of the tutor or the lecturer.”

“There’re probably 100 [people] that I can count within my friendship group or clubs group at UQ, who are like ‘Barclay, we love what all of you guys are doing down there at CPAC (Conservative Political Action Conference). But I’m going for a job next week. And I can’t be seen anywhere near this CPAC branding.’”

He believes that some of the consequences of this will be felt in the long run.

“We’ll have a society that instantly typecast people into little boxes,” McGain noted, “If someone calls for tighter immigration, all of a sudden, you’re a Nazi in that world.”

“Diversity of thought is the only diversity that should matter in a classical liberal framework,” he added, “because it shouldn’t be based off inheritable characteristics that we have no control over.”

The sentiment is echoed by Sam Jacobs, 22, the president of the Macquarie University Liberal Club in Sydney. He said left-wing ideology is the “status quo” at Australia’s public universities and is actively promoted by teachers and university administrators.

“As a result, students who express left-wing views are nurtured and lauded by the university, its teachers, and its systems. On the other hand, there is no direct benefit to students with conservative views to express those views,” he told The Epoch Times.

“In fact, it is generally a net negative as you will earn the hostility of your left-wing professors, tutors, and peers who largely do not consider conservative views to be legitimate.”

The intolerance towards conservative views takes many forms, with the most significant being the disruption brought about by socialist groups who “feel they have free reign” to crash conservative events because “the university does not effectively sanction them despite frequent rule-breaking,” he added.

“If the university appropriately punished this behaviour, then political discourse on campus for conservatives would be better.”

Jacobs, a proponent for conservative Liberal economic values, said he believes such principles  “recognise the reality that spending by both governments and private citizens has to over the long-term be financially accounted for and sustainable.”

But Jacobs noted “the average student who doesn’t know or care about politics is likely to absorb these left-wing views by osmosis because humans are naturally inclined to fit in and share the dominant views of the group.”

Hailey Do, 22, a marketing student at Macquarie university, was one of those students.

Do, who currently identifies as apolitical, said she participated in a climate strike in her first year at university because the climate change narrative promoted by the media and the curriculum “makes you feel like you must fight for such things.”

“When you participate in those events, you feel like you’re being part of a community, and you’re helping other people. Same thing with the He4She [campaign] and #Metoo. As for the climate strikes, I felt like everyone is joining hands to change the world for the better,” she said.

“But when I look back, I realise the narrative they promoted is not the root cause of the problem; people usually judge things on the surface without getting deeper than that.

“With climate change, the issue is actually more multi-faceted than how it’s usually portrayed and that nature itself also plays a role in that.”

A former supporter of the feminist movement, Do became more cautious about backing feminist campaigns after realising the media often only gives voice to one side in the debate.

Kevin Donnelly, Australia’s educator and commentator, said universities, as a result of the ’60s and ’70s cultural revolution and the decision by the cultural left to engage in institutions, “have especially been affected by politically correct ideology and wokeness.”

“Such is the dominance of neo-Marxist and postmodern-inspired ideology that left-of-centre academics in a range of subjects dominate departments and faculties across the English-speaking world,” he argued in a commentary on The Epoch Times in August.

Donnelly also said that in the West, where the prosperity and freedom that people experience means there’s little chance of the disaffected using violence to take control, “the focus of the revolution shifted from the economy to what has become known as the culture wars.”

“The end result was long held, and accepted beliefs and institutions were attacked and undermined,” Donnelly wrote in his latest book ‘The Dictionary of Woke.” 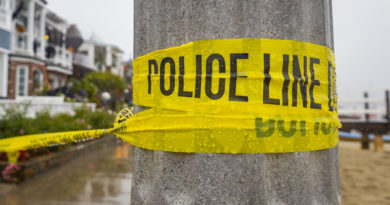