The suicide of a Washington police officer who was on duty during the Jan. 6, 2021, U.S. Capitol breach has been designated as a line of duty death, according to a lawyer for the officer’s widow.

David Weber, the lawyer, told The Epoch Times in an email that news reports about Jeffrey Smith’s suicide being determined by the D.C. Police and Firefighters’ Retirement and Relief Board to be a line of duty death were accurate.

The board “ruled that Jeff died as a sole and direct result of the injuries he suffered on January 6th, 2021, defending our Capitol,” Weber said in a social media post.

The board couldn’t be reached, but Rep. Don Beyer (D-Va.), who represents the district Jeffrey Smith resided in, said the board stated that the officer “sustained a personal injury on January 6, 2021, while performing his duties and that his injury was the sole and direct cause of his death.”

Erin Smith, the officer’s widow, asked the board in 2021 for the designation, which enables the widow to get more money.

According to D.C. code, a death in the performance of duty means the death “was the sole and direct result of a personal injury sustained while performing such duty.”

An injury or illness report filed by Jeffrey Smith said he was struck by “some kind of object … in the face shield” and he began feeling pain in his neck and face.

According to a lawsuit filed by Erin Smith against the two alleged attackers, Jeffrey Smith was struck by a cane or crowbar by the two men. The suit says the officer’s “face shield was up” when he was struck.

The two men named in the suit have not been charged with any crimes related to the breach.

Anthony Shore, a lawyer for one of the men, told The Epoch Times, “My client and I applaud the decision by the retirement board and the fact that Erin Smith will now evidently receive benefits in connection with her husband’s tragic death.”

Both of the defendants have asserted they are innocent in court filings.

At least four officers committed suicide in the wake of the Jan. 6 breach.

“Officer Jeffrey Smith would still be alive today if he hadn’t risked his life to defend all of us at the U.S. Capitol and our democracy itself on January 6th. His heroism led to his death, which absolutely occurred in the line of duty, and the official acknowledgement of that fact is an important moment that I hope will bring a measure of solace to his family and friends,” Beyer said in a statement. 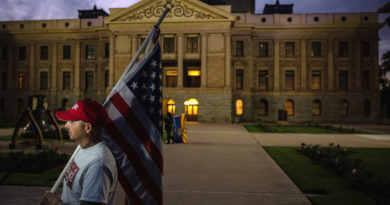