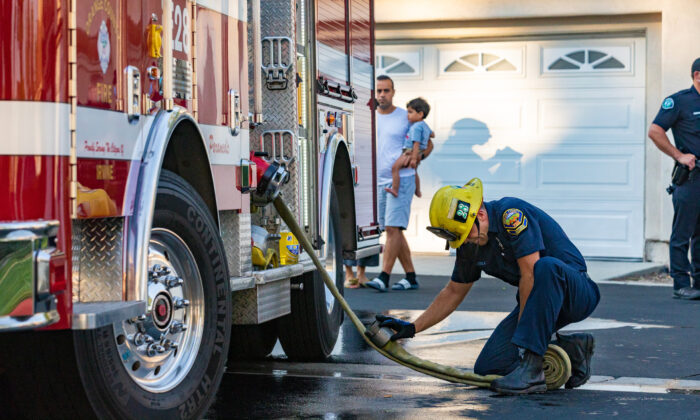 A firefighter with the Orange County Fire Department connects a hose to the truck while bystanders look on in Irvine, Calif., on Aug. 17, 2020. (John Fredricks/The Epoch Times)

OCEANSIDE, Calif.—Oceanside firefighters rescued two dogs from a house that was on fire, authorities said today.

Around 3:30 p.m. Monday, the Oceanside Fire Department responded to a report of smoke coming from the top floor of a two-story house at 1065 Village Court, the department said.

Witnesses told firefighters that the family was not home, but there were two large dogs still in the house.

The crews forced entry through the front door “isolated and extinguished the fire to the kitchen area, and ensured the dogs were safe while clearing the house of the smoke,” said Battalion Chief Lucifer Keener.

OFD teams stayed on scene for 30 minutes to check for fire extension and to “wait for the owners to reunite them with their dogs,” Keener said.

No other information was released.

Nativity Scenes on Display at 40 State Capitols This Christmas Season

Avocados, ice cream and a robotic arm on their way to International Space Station | US News