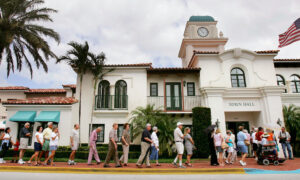 On June 9, The Epoch Times reported how Florida was the number one state in the nation for people to move to, while New York and California took first and second place respectively for states that have the most people leaving. To those moving to Florida from blue states, Polk County Sheriff Grady Judd says: “Do me a favor,” and “don’t vote the way the majority of the people voted from where you came or you’ll have here what you had there. Guaranteed.”

One of the reasons cited by those fleeing their blue state hometowns was the rising crime rates. According to Judd, the escalation in crime rates are a direct result of the “defund the police” movements in many Democrat-run states.

“Florida has had a Republican House, a Republican Senate, and a Republican governor for a very long time,” Judd told The Epoch Times in a phone interview. “So all you have to do is compare-and-contrast. You go to these areas where crime is through the roof, look at you representatives.”

In April 2021, Florida Gov. Ron DeSantis signed the “Anti-Riot” HB1 bill into law. This new measure makes it a felony to tear down statues or monuments in the Sunshine State and provides the governor and Florida Cabinet the authority to override the efforts of any other state official to cut law enforcement spending.

According to SafeWise, Marco Island in Judd’s Polk County ranked first in the state of Florida for safety in 2021.

Conversely, in June 2020, the Portland City Council voted 3-1 to cut at least $15 million from the police bureau. The cut effectively eliminated 84 positions in the department.

So far this year, 37 homicides have been reported in the city, an increase of more than six times compared to the same period last year.

In November 2020, the Seattle City Council cut 18 percent of the budget from their police department. By January, Seattle saw a 48 percent increase in murders, the highest number in almost 30 years. In May, 260 police officers chose to leave the Seattle police force.

“The good things that are happening in Florida don’t just happen,” Judd insisted. “If they did, those good things would be happening in Seattle and Portland. But when you create an environment where criminal conduct is acceptable that’s exactly what you get.”

Judd also attributes the better safety conditions in Florida to the public’s connection with law enforcement and effective leadership in government.

“Florida Sheriffs, who report directly to their citizens, are very good at holding chronic criminals accountable, while simultaneously maintaining the trust of the law-abiding citizens,” Nienhuis told The Epoch Times. “This has all resulted in a consistent decrease in crime during the last 4 decades. This is foundational to Florida’s growth, due to the fact that, regardless of age or family status, everyone wants to live in a safe community.”

“Florida’s great weather and beaches have always been a draw for tourists,” Nienhuis added. “However, low taxes, common sense leadership in state government, and the community’s support of law and order, have made those tourists realize that Florida is also a great place to live, work, and raise a family.”

Judd agreed, saying when he asks blue state migrants if they chose to move to Florida because of the warm weather, low taxes, and low crime rates, they always answer “yes.”

“Then do me a favor,” he tells them. “Welcome to Polk County. Welcome to Florida. But please don’t vote like you did up north. You’ll still have warm weather in the winter but you won’t have low taxes or a safe community.”

“We are definitely seeing the trend of people fleeing blue ‘lockdown’ states for the ‘free state’ of Florida,” state House Rep. Blaise Ingoglia, a Republican, told The Epoch Times. “They are coming here because of sunshine and opportunities. I can only hope that they leave any liberal ideology at the border.”

“You are coming for a reason,” Ingoglia reminded the blue state migrants. “Please don’t ‘New York our Florida.’ Don’t turn this great state into the state you fled from.”

Asked about the fears held by some Floridians that the blue state migrants will dim the freedoms of the Sunshine State, Judd admitted “their fear is well-founded” because individuals casting ballots in blue states don’t seem to understand that the officials they elect are the ones enacting the destructive policies that made them leave.

“None of the policies and practices in place up north just happened. It happened because they voted for elected officials that created those policies or laws.”

To assuage their fears, Judd advised worried Floridians to educate their new blue state neighbors and to explain that “all of the good things we have in Florida didn’t just happen.”

“It was the people we elected to the city commissions, to the county commissions and into the state legislature that made good things happen,” Judd said. “If you live in a high crime community, vote those officials out.”

“Nothing else really matters if you aren’t safe and you don’t feel safe,” Judd concluded. “A community can’t thrive if it’s eaten alive by crime.”

The Epoch Times asked Florida Gov. Ron DeSantis what he’d like to share with the migrants coming from blue states.

“For the almost 1,000 people a day who are moving to Florida,” DeSantis wrote in an email. “Welcome to Florida, I hope we can all work together to keep our state the special place it is, an oasis of freedom in our country.”

“All Americans can learn from the mistakes made in lockdown states and not repeat those mistakes,” he added. “It won’t happen in Florida.”

“People who come to Florida from lockdown states can see for themselves how well we are doing here. If you look at voter registration trends overall, it’s positive; there isn’t any indication that the people of Florida—newcomers and longtime Floridians—are shifting away from the principles that helped our state succeed.”

Judd also expressed goodwill to Florida’s new migrants: “Welcome to Florida. You’re in a safe state, you’re in a healthy state, and we love people coming to our state. But don’t vote the way the majority of the people voted from where you came or you’ll have here what you had there. Guaranteed.”