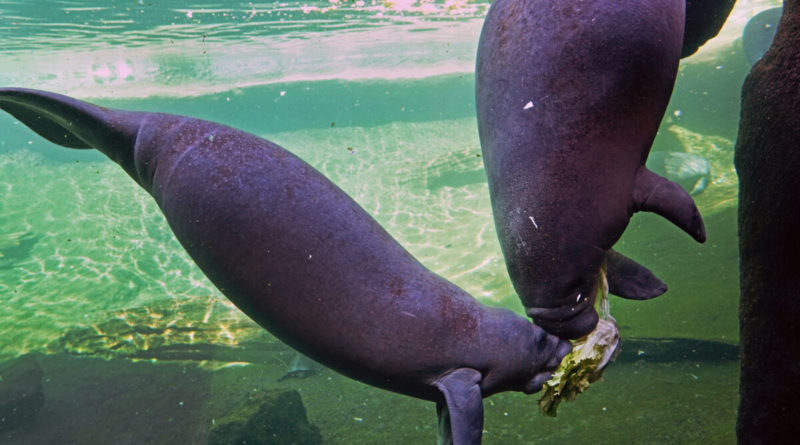 
Five conservation groups petitioned the U.S. Fish and Wildlife Service on Nov. 21 to reclassify the manatee from threatened to endangered status because the mammal’s population is rapidly declining, largely due to starvation.

Save the Manatee Club, Miami Waterkeeper, Harvard Animal Law and Policy Clinic, the Center for Biological Diversity, and [engineer] Frank S. González Garcia, asked the U.S. Fish and Wildlife Service to increase the  protections for the West Indian manatees under the 1973 Endangered Species Act. Under the Act, the USFWS must complete a thorough review of the species’ status within 12 months of receiving the petition and decide whether the petition warrants changing the status of the manatees.

Attorneys for the conservation groups say the reclassification is just the first step in protecting the species.

“West Indian manatees from Florida to the Caribbean are facing drastic threats from habitat loss, boat strikes, pollution, climate change and toxic algae blooms,” said Ben Rankin, a student attorney at the Harvard Animal Law & Policy Clinic, in a released statement. “The restoration of full Endangered Species Act protections is an essential first step in conserving this species everywhere it is found.”

In 2017, responding to the mammals’ population growth, the U.S. Fish and Wildlife Service changed manatee classification from “endangered” to “threatened.” The manatee numbers had increased from 1,000 in 1979 to 6,000 in 2016.

However, in 2021, the number of manatees dropped by 1,110, according to the Center for Biological Diversity. Their demise was blamed on an increase in boat strikes and starvation. Poor water quality had killed off their main food, seagrasses, in inland waterways where manatees seek warmer waters during the winter months.

“With Florida’s manatees dying by the hundreds, it’s painfully clear that the 2017 federal decision to downlist the species was scientifically baseless,” Ragan Whitlock, a Florida-based attorney for the Center for Biological Diversity, wrote in a statement. “The Fish and Wildlife Service now has the opportunity to correct its mistake and protect these desperately imperiled animals.”

The Center for Biological Diversity estimates that 20 percent of manatee deaths were “human-caused” as a result of boating accidents. And with a record number of people moving to Florida, that number will likely increase, the agency predicted in a 2014 report.

In the petition, experts claim that more than 100 manatees are killed by boaters each year. That drove the Florida Fish and Wildlife Conservation Commission to propose a rule to increase boaters’ awareness of manatees, as well as other coastal wildlife, according to its website.

More than 1,100 of the mammals died in 2021 mostly from starvation when winter temperatures caused them to move to warmer inland waters devoid of seagrasses, according to the press release and the Center for Biological Diversity’s website.

In a count that ended in October, there have been 726 manatee deaths so far in 2022.

Eighth-generation Floridian Savannah Bergeron, a student attorney for the Harvard Animal Law and Policy Clinic, believes the problems causing unusually high numbers of manatee deaths will take years, or even decades, to solve.

“In the meantime, the absolute least we can do is ensure that manatees are given the protections they deserve under the Endangered Species Act, especially since they’re so important to our coastal ecosystems and are one of Florida’s iconic species,” Bergeron said in a written statement.

“In 2017, Save the Manatee Club strongly opposed the biologically unjustified downlisting of the manatee, and in the years since our worst fears have become reality as we approach what will likely be a third winter of mass manatee mortality and aquatic ecosystem collapse,” said Patrick Rose, an aquatic biologist and executive director of Save the Manatee Club in a released statement.

“Re-designating manatees as endangered will be a critical first step in righting a terrible wrong. In addition, we call for full implementation of all tools available under the Endangered Species Act, including reinstatement of the Expert Manatee Recovery Team and other expert working groups such as the Manatee Warm-Water Task Force. The time to act is now.”

Wild manatees return to inland waterways every year during the winter months. But with no food there, they starve. As each winter in Florida approaches and ocean temperatures reach on average a chilly 68 degrees, the manatees make their way in large numbers to warmer estuaries like the Indian River Lagoon (IRL). But this place of refuge has become a place of starvation for the friendly mascots of Florida. FWC said animals “normally” will move on when their food sources diminish—but not manatees. Much like humans, they are “territorial and predictable.”

The manatee’s main food source is seagrass, which has been nearly wiped out by pollution such as failing septic systems, urban sprawl, and fertilizer runoff causing damaging nutrients to drain estuaries such as IRL of necessary oxygen for plant life to prosper. In order to find solutions to aid starving mammals, in 2021 Florida Fish and Wildlife Commission (FWC) partnered with the U.S. Fish and Wildlife Service (USFWS), working together to combat what they call an “Unusual Mortality Event. (UME).

In January, record low temperatures were recorded in the Sunshine State, and scientists and researchers decided to break their own rules by hand-feeding the manatees heads of lettuce from behind a protective screen so as not to confuse the mammals to associate humans with food. Indeed, the FWC warned the public that feeding manatees is against the law and “authorities won’t hesitate to prosecute.”

By the end of March, almost 2,000 pounds of lettuce had been distributed to the manatees, making the program a success, Scott Calleson, an Ecological Services officer in the Florida office of the U.S. Fish and Wildlife Service told The Epoch Times in March.

Since the program ended, the group has not ruled out continuing to feed next winter.

“The effort was designed as a winter intervention to help get the animals through the winter,” Calleson said. “There was very little food.”

The endangered designation could be the answer to ensure the manatees’ survival, as well as a catalyst for addressing water concerns and habitat loss, Rachel Silverstein, executive director for Miami Waterkeeper, said in a written statement.

“Increasing protections for manatees with an endangered listing would provide immediate protection,” Silverstein said in a written statement. “With astounding losses of seagrasses around the state, we need to address water-quality issues to give the manatee a fighting chance to survive and thrive.”

Frank S. González García, an admirer of the manatees who is concerned with the loss of natural resources, said in a written statement that he becomes “emotional” when he reads about what is happening to the manatees and said reclassifying the mammal could make a difference in their survival.

“It fills us with emotion every time the local press publishes information about manatee sightings off the coast of Puerto Rico, even if it is to report that they appeared injured or dead. Being able to see them is an extremely rare but very special event,” González García said. “The Fish and Wildlife Service could make a huge difference, enforcing protection, designating critical habitat, and making sure manatees have adequate food and freshwater resources to thrive.”

Jannis Falkenstern is an Epoch Times reporter who covers the state of Florida.