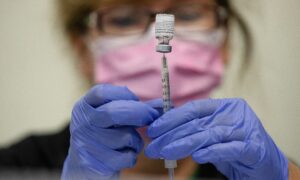 Food and Drug Administration (FDA) officials have proposed a future model for developing new COVID-19 vaccines that would be built on the approach to creating influenza vaccines.

Accumulating data suggest the current COVID-19 vaccines, based on a virus strain that is now generations old, “may need to be updated at some point to ensure the high level of efficacy demonstrated in the early vaccine clinical trials,” the FDA said.

One concern is how new strains of SARS-CoV-2 keep emerging, some of which bypass protection bestowed by the vaccines better than others. SARS-CoV-2, also known as the CCP (Chinese Communist Party) virus, causes COVID-19.

The vaccines provide virtually no protection against infection from Omicron, the strain that is dominant in the United States at present, though they have held up better against severe disease.

U.S. regulators say an orderly and transparent process should be outlined for changing the composition of the COVID-19 vaccines, with the process ideally being adopted by countries around the world in addition to the World Health Organization (WHO).

The model in place for annually updating influenza vaccines can inform the process, officials say.

The influenza vaccine model is based on predicting which variants will be circulating in the future. WHO leads the effort, voting on the composition of the vaccines to be deployed in the northern hemisphere five to six months later and the southern hemisphere three to four months in the future.

U.S. authorities often adopt the WHO’s recommended composition, though the FDA, in consultation with its expert advisory panel on vaccines, occasionally diverge from the advice.

While the flu model could be used as a foundation for future COVID-19 vaccines, there are unique issues for COVID-19 that will need to be addressed, FDA officials say, including how the seasonal pattern for SARS-CoV-2 surges has yet to be identified; how the COVID-19 vaccines are built across different platforms, such as messenger RNA; and how the experience with those vaccines to date wouldn’t be sufficient to get authorization or approval without clinical trial data.

Further, even the best-matched flu vaccines end up being around 60 percent effective, a figure some vaccine manufacturers have described as poor.

The proposed shift to a flu-like model contains “a lot of assumptions,” John Moore, a virologist at Cornell University, told The Epoch Times.

Clinical trials of Omicron-specific shots are ongoing, with data on human subjects not out yet. Data from animal studies, though, which are “usually pretty predictive, do not support the use of that specific vaccine as a boost,” Moore said. “So if that’s going to be the case in the humans, why go through the complexity of introducing a new vaccine if it’s not needed?”

The new model was proposed in a briefing document published ahead of an April 6 meeting. During the meeting, which The Epoch Times will stream live, FDA officials will discuss with the agency’s expert advisers various matters relating to COVID-19 vaccines, including optimal use of additional COVID-19 shots in the future.

The FDA recently cleared fourth doses for millions of Americans without consulting the advisers, part of a growing pattern of minimizing their role.

Among those presenting will be Dr. Kanta Subbarao, a WHO official, on COVID-19 vaccine composition, and Robert Johnson, a government official on the development of variant-specific vaccines.