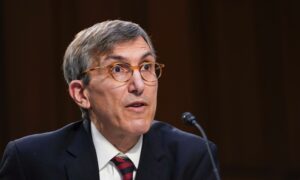 A Food and Drug Administration (FDA) official on April 6 defended the agency’s recent decision to authorize fourth COVID-19 vaccine doses for millions of Americans without convening its expert advisory panel.

Dr. Peter Marks, head of the FDA’s Center for Biologics Evaluation and Research, downplayed the authorization, claiming it was not “a major expansion or a major change.”

Officials “looked over the data and felt was reasonable to do at the time,” he said, citing information from the United Kingdom and Israel that indicated the protection from a third shot, or first booster, has been waning amid circulation of the Omicron virus variant.

Marks was responding to Dr. James Hildreth, president and CEO of Meharry Medical College, who sits on the FDA’s Vaccines and Related Biological Products Advisory Committee (VRBPAC), a panel of outside advisers who the agency typically consults before making decisions like clearing additional vaccine doses.

The FDA convened the VRBPAC on April 6 to discuss how to handle COVID-19 vaccines in the future, including whether to pivot towards variant-specific boosters since the vaccines have proven less effective against recent strains like Omicron.

“I’m just wondering why this discussion is being held now when you already made a major decision about boosters. What was the reason for not convening the VRBPAC to make that decision?” Hildreth wondered.

Marks said clearing a fourth shot was a narrow matter when compared to the subjects being discussed on Wednesday and indicated regulators would heed advice from advisers on at least some future vaccine decisions.

Members will also weigh in on whether future boosters should have a composition targeted against one or more variants that have circulated more recently than the Wuhan strain, which was displaced in the United States in 2020.

The FDA had not previously said why it bypassed its advisory panel before clearing fourth shots for all Americans 50 and older, and some with weakened immune systems 12 and older.

The agency has increasingly chosen not to solicit advice from the panel before making decisions affecting millions of Americans, stoking criticism from members of the panel and some experts who are not members.

“The culture seems to have changed in the last year,” John Moore, a virologist at Weill Cornell Medicine, told The Epoch Times. “They’ve never been mandated to accept the recommendation of advisory committees, but it’s been the norm. And over the past year, that’s not what’s been happening.”

Full COVID-19 Origins ICA Report and Intelligence Should Be Declassified