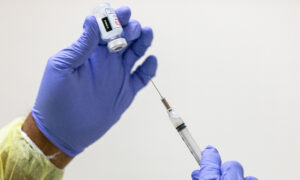 The current plan is “to gather our independent panel of outside experts next month to have a transparent discussion about considerations for 2022 booster shots, including whether and when those boosters may be needed and for which populations, based on the available data and latest science on circulating or emerging virus variant,” an FDA spokeswoman told The Epoch Times via email.

The meeting date has not yet been made known.

Upon receipt of such requests, the FDA typically convenes the Vaccines and Related Biological Products Advisory Committee. Panel members are asked whether the regulatory agency should accept the requests or deny them.

However, both the FDA and the Centers for Disease Control and Prevention (CDC)—which has its own advisory panel for vaccines—have increasingly bypassed the experts when making decisions on boosters, drawing criticism.

The Pfizer and Moderna vaccines were both originally billed as two-shot regimens that were highly effective at protecting against infection from SARS-CoV-2, or the CCP (Chinese Communist Party) virus, which causes COVID-19, and severe COVID-19 for those who did catch a case despite being vaccinated.

But the jabs provide little protection against infection from newer variants, including Omicron.

They’re also less effective against protecting from severe disease among people who get COVID-19. Some experts, though, say the protection is adequate and have questioned the need for one booster, much less two, particularly for healthy people.

The FDA has said it will review the requests for a second booster “as expeditiously as possible using our thorough, science-based approach.”

The CDC is assisting with the process, Dr. Rochelle Walensky, the agency’s director, said this week.

Pfizer and its partner BioNTech said the initial booster’s effects wane three to six months later, necessitating a fourth shot. The companies said their EUA is based on real world data from Israel and results from a non-randomized clinical trial in Israel that featured 154 participants who had received a fourth Pfizer shot and 120 others who got a fourth Moderna dose.

“A fourth vaccination of healthy young health care workers may have only marginal benefits. Older and vulnerable populations were not assessed,” they wrote.

Moderna said its submission included “recently published data generated in the United States and Israel” after Omicron emerged but did not detail the information.

Dr. Vinay Prasad, an epidemiologist at the University of California, San Francisco said on March 18 that the only way to know if a fourth dose helps bolster protection is to complete a large, randomized trial, which has not yet been done.

“Will the FDA grant EUA without these data? I worry the answer is yes,” he said.