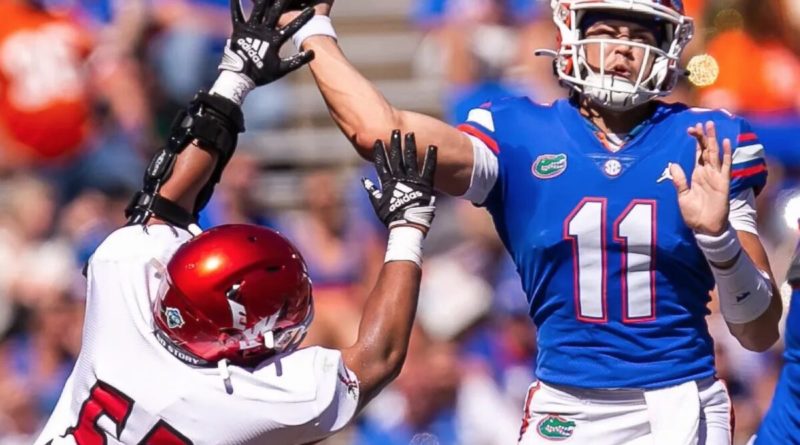 Kitna, who is the son of retired NFL quarterback Jon Kitna, was arrested on Wednesday by Gainesville police and charged with two counts of distribution of child exploitation material and three counts of possession of child abuse images, officials said in a statement.

Police, working with the Internet Crimes Against Children (ICAC) Division, searched the 19-year-old’s home and seized his electronic devices after receiving a cyber tip from the National Center for Missing and Exploited Children (NCMEC).

“The Cyber Tip indicated that a Discord user distributed an image of child sexual abuse material (CSAM) through their platform,” police said.

Upon further investigation, police discovered two images that had been shared via the instant messaging platform from the same residence and that the likely Discord account holder was Jalen Kitna.

Detectives interviewed the sports player, during which he allegedly told officers that he remembered sharing the two images but that he thought they were “legal” because he had found them online.

“Kitna advised that he realized he should not have shared those two images, based on the reaction from the other Discord user that he shared them with,” Police said.

Kitna was booked into the Alachua County jail, ESPN reports. He is expected to appear before a judge on Thursday morning.

Meanwhile, the Gators suspended Kitna indefinitely shortly after his arrest.

“We are shocked and saddened to hear of the news involving Jalen Kitna,” the University of Florida Athletic Association said in a statement.

“These are extremely serious charges and the University of Florida and the UAA have zero tolerance for such behavior. Jalen has been suspended indefinitely from the football program.”

It is not immediately clear if Kitna has an attorney.

Kitna signed with Florida in May 2020 after choosing them over offers from Boston College, Georgia Tech, Liberty, and Tennessee, among others.

The redshirt freshman appeared in four games this season, completing 10 of 14 passes for 181 yards and one touchdown.

His father, Jon Kitna, played as a quarterback in the NFL for the Seattle Seahawks, Cincinnati Bengals, Detroit Lions, and Dallas Cowboys.

The Gainesville Police Department on Wednesday urged parents to be aware that children are solicited and exploited through social networking applications such as Discord, Facebook, KiK, Snapchat, and TikTok.

“Please be vigilant and aware of any social networking platforms your children may access,” police said.

US Set to Defend Gymnastics All-Around Title Without Biles