As the finger-pointing over what caused the summer water crisis continues in Jackson, Mississippi, a proponent of the free market and individual liberty examines how local and national media coverage concocted two culprits—racism and climate change—to fit a narrative disparaging to the state while downplaying what he said is the true cause: incompetence.

For Douglas Carswell, President & CEO of the Mississippi Center for Public Policy (MCPP)—a non-profit organization that advocates for low taxes, light regulation, higher standards in education, and American exceptionalism—the divide between the media’s narrative and what the people of Jackson were seeing with their own eyes became a significant wake-up call for the state capital.

“Any time something goes wrong in Mississippi, media will attribute it to events that happened 50 to 150 years ago to say that it’s all a consequence of white racism,” Carswell told The Epoch Times. “It’s an off-the-shelf template that reporters dust off whenever Mississippi comes up, but I think the water crisis was a tipping point for that narrative because ordinary Mississippians could see for themselves how ridiculous it really was.”

National and local media platforms blamed the water crisis on systematic racism within the majority-black city. Some reports got it entirely wrong by flat-out stating that the city had run out of water because of climate change, while, as Carswell pointed out, Jackson has one of the largest reservoirs in the southern United States.

“The Romans managed to master the technology of putting water into pipes to supply a city with fresh water 2,000 years ago,” Carswell said. “There’s no excuse for Jackson not to master that technology today. It’s incompetence, and the people of Jackson can see that.”

While Carswell says the city government’s mismanagement is transparent, the Mississippi chapter of the National Association for the Advancement of Colored People (NAACP) has alleged that Republican Gov. Tate Reeves disinvested funds from Jackson that could have gone to fix the problem.

The NAACP called on the Environmental Protection Agency’s (EPA) recently formed Office of Environmental Justice and External Civil Rights to investigate the matter, stating in its letter to Reeves, “We have been in keen observance of the long history of Jackson getting less than its fair share of public funding from the Mississippi state budget and at times, being denied of any funding at all when it was deserved.”

The NAACP filed a complaint with the EPA under Title VI of the Civil Rights Act of 1964, solidifying the allegation that the water crisis was caused by racial discrimination.

The Office of Environmental Justice and External Civil Rights didn’t immediately respond to a request for comment on the investigation.

On Oct. 17, Rep. Bennie Thompson (D-Miss.), who serves as chair of the Committee on Homeland Security and chair of the U.S. House Select Committee on the January 6 Attack, launched his own investigation into the state’s spending, asking Reeves for data on how it plans to distribute American Rescue Plan Act and Bipartisan Infrastructure Law funding.

President Joe Biden pledged millions to combat “structural racism,” which has led to equity, diversity, and inclusion departments cropping up in government agencies.

Jackson Mayor Chokwe Antar Lumumba stated in a city press release, “We know that the condition of Jackson’s water system didn’t happen overnight but is due to decades of disinvestment in the city’s infrastructure.”

However, there are many within Jackson who have been watching this play out for years and point to the city government’s own underinvestment in its water infrastructure, which has led to 150,000 citizens without potable water.

According to Reeves in an Oct. 17 press release, “Throughout this emergency, we have had to procure chemicals, workers, and materials for the city routinely because they were incapable of doing so.”

Reeves added that the state has “poured millions of dollars from taxpayers of every county into this effort to rescue the city from a crisis of incompetence.”

On Oct. 20, during a traditional turkey pardoning ceremony to support a campaign designed to raise money for families in need for Thanksgiving, Reeves answered (the discussion beginning at 14:00) a question from a reporter about the problems with the city’s water system.

“The mayor has gone on national TV and blamed that on a lot of things,” Reeves said. “But what we have proven over the last 52 days is the water struggles in Jackson were specific to the incompetence of this administration.”

The state stepped in on Aug. 29, Reeves said, and set up a unified command structure, naming both the Department of Health and the Mississippi Emergency Management Agency as leads.

Out of his 19 years in office, with over 1,100 water systems in the state, Reeves said this has been the only time he’s had to sign an emergency proclamation to ensure that water was delivered to the city.

Carswell said much of the problem stemmed from a simple failure to bill its citizens.

“In 2017, Jackson’s water billing system collected $61 million in revenue, and the operating costs of the city’s water system were about $54 million,” Carswell said. “That left a healthy surplus that competent management might have allocated to meet maintenance costs.”

In 2022, the amount of revenue collected is likely to be closer to $40 million, Carswell said, “far below running costs.”

“Not only is there no surplus to go toward maintenance, but there does also not seem to have been much maintenance even when there was a surplus,” Carswell said. “How on earth does a city water authority manage to lose almost a third of its revenue in the space of five years?”

In any given city, water is what Carswell called a “cash cow” because it has a captive market.

“Citizens are billed, and they have to give the city government a check,” Carswell explained. “What Jackson did is it monstrously failed to invoice people.”

Several years ago, the city government contracted with an engineering firm to set up a new billing system, Carswell said, which ended in the firm being sued for $89 million, leaving consequentially more money to be spent on city attorneys than on improving the city’s water system.

“If a private business fails to invoice a third of its customers, it will go bankrupt,” Carswell said. “Here we are in Jackson with the authorities failing to generate a third of its revenue because they couldn’t get their act together and issue invoices.”

In addition to a failure to invoice, the city failed to have qualified personnel running the water facilities, he said.

“The state repeatedly offered to help, and those offers were ignored,” Carswell added. “Eventually, things got so bad that the state had to step in and pick up the cost of half of it and fix things.”

After the federal and state governments stepped in, the total bill came to less than $200,000, he said.

“It was a minuscule amount of money to fix a problem that was overwhelmingly caused by grotesque incompetence among civic leaders in Jackson,” Carswell said.

The city of Jackson didn’t reply to The Epoch Times’ request for comment.

“Anyone in Jackson could see the incompetence, which is why I think this was a significant moment when people could for the first time in a long time honestly assess the cause of public policy in the state without constantly being beaten over the head by journalists with an agenda and absurd narrative,” Carswell said.

It’s not only national reporters with no connection to the state that engage in the berating, but also local journalists, he said.

“It’s almost as if some of the reporters who write for these papers are trying to show the world that they are somehow sophisticated by dumbing down Mississippi,” Carswell said.

An example of Carswell’s statement could be how one local media outlet framed Reeves’s answering the reporter’s question during the turkey pardoning ceremony as a rant, omitting the part about the reporter asking the question, implying that Reeves—unsolicited—went on a tirade.

As a former elected official in the Parliament of the United Kingdom (UK) for 12 years who arrived in Mississippi with not only an outsider’s view but also with a love of the state, Carswell said it’s unfortunate.

“I think it’s one of the most wonderful places in America, and there’s nowhere I’d rather live,” he said. “Yet some of these journalists who write for Mississippi media organizations seem to think that their success can be measured by how often they beat down their own state.”

Carswell’s effort as a politician in the UK was to advocate for the British exit (also known as Brexit) from the European Union that took place in 2020, he said.

“Once I achieved what I wanted to get done, I quit,” he said. “I didn’t want to be in politics for the sake of finding another excuse to live at the taxpayer’s expense.”

Now in Mississippi where he is the president of the MCPP, Carswell said he continues to advocate for what he calls American exceptionalism, which is often mistranslated as racism in Marxist ideologies such as Critical Race Theory (CRT).

MCPP drafted a bill that made its way to and was signed by Reeves.

The bill prohibits the teaching of the divisive and racist concepts found in CRT that promote the idea that one race is inherently superior or inferior to the other.

For Carswell, America—including the state of Mississippi—is not an archaic paradigm of racism waning into a shadow of irrelevancy but a beacon of freedom for the rest of the world being kept from its full potential only by lack of vision.

“The reason we live and work in air-conditioned rooms rather than mud huts is because of decisions that were made in a courthouse in Philadelphia in 1787, and we need to make sure that the next generation of Americans appreciates that sublime inheritance because, if they forget it, America will just become a giant version of California,” he said. “That will be a disaster not only for the Republic but also for the free world.” 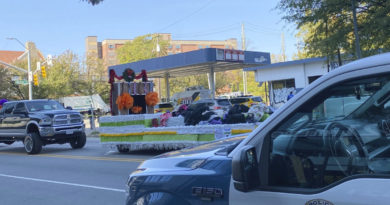 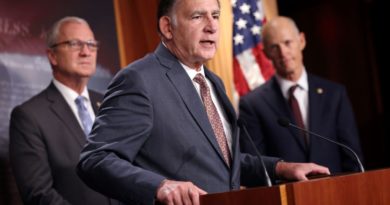