New York Gov. Kathy Hochul nominated Judge Hector LaSalle as the next chief judge of the New York State Court of Appeals on Thursday and backed his pick for a chief administrative judge.

LaSalle is currently the presiding justice of the New York Supreme Court’s Second Department in Brooklyn, the largest appellate court in the United States.

Hochul, a Democrat, acknowledged that New York’s justice system needs to improve, noting a backlog caused by the COVID-19 pandemic, and said LaSalle “shares my urgency in ensuring that our court system is functioning better.”

“I’m proud to nominate the Honorable Hector D. LaSalle as the next Chief Judge of the New York State Court of Appeals. New York’s Court of Appeals has a long history as a beacon of justice, and Judge LaSalle is an outstanding jurist in that tradition,” Hochul said in a statement.

“Judge LaSalle has the skills, experience, and intellect to ensure that we expand access to justice and that our highest court is seen as a leader across the country,” she continued.

Hochul indicated that she views LaSalle, who was appointed by former Gov. Andrew Cuomo, as the right person to restore New York’s justice system to its former “preeminent position in jurisprudence in our nation.”

“I want to regain that exceptionalism, and I believe that Judge Hector LaSalle leading this court will achieve exactly what I’m looking for. So, we’re excited about that announcement as well,” she added.

The state’s majority Democrat Senate, which will reconvene on Jan. 3, 2023, has 30 days to confirm or reject LaSalle’s nomination. If confirmed, he will join six associate judges serving 14-year terms on the state Court of Appeals.

LaSalle’s nomination was met with mixed reactions, with some urging the state Senate to reject Hochul’s choice.

“The Senate looks forward to discharging our constitutional responsibility to consider the Governor’s nomination and we intend to do so through a serious and deliberative process,” Stewart-Cousins said.

Democrat state Sen. Andrew Gounardes from the 22nd Senate District, a member of the state Senate Judiciary Committee, said he was concerned about LaSalle’s rulings on crisis pregnancy centers and workers’ unions.

“At a time when the conservative bloc on the U.S. Supreme Court is actively undermining Americans’ fundamental and civil rights, the New York judiciary must be a bulwark and beacon in protecting and advancing those same rights,” Gounardes said in a statement.

“The nomination for Chief Judge of the New York State Court of Appeals is troubling. New York needs a Chief Judge that supports workers and their unions,” said the union’s president, Mario Cilent.

Cilent added that LaSalle has “unfortunately shown a willingness to put the interests of corporations ahead of workers which is disturbing in a state with a long history of supporting workers’ rights.”

New York State Bar Association President Sherry Levin Wallach congratulated LaSalle for getting the tap, praising his “keen ability to build consensus and to increase productivity” in his current role at “one of the busiest appellate courts in the nation.”

“There is no doubt that he will do the same for the Court of Appeals. He possesses a remarkable intellect and has deep practical knowledge of the courts and the challenges they face,” Wallach said.

“He has a great deal of experience on both the trial and appellate bench and has granular knowledge of both the adjudicative and administrative aspects of the job of chief judge,” she continued. “I commend the governor on this outstanding choice.” 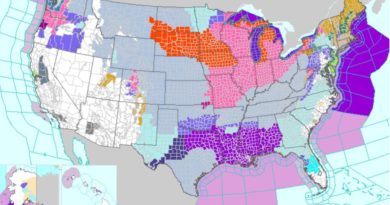 Federal Agency Issues Warnings Across US Over ‘Major’ Storm

Man Charged With Killing 18 in Texas Convicted of 1 Murder