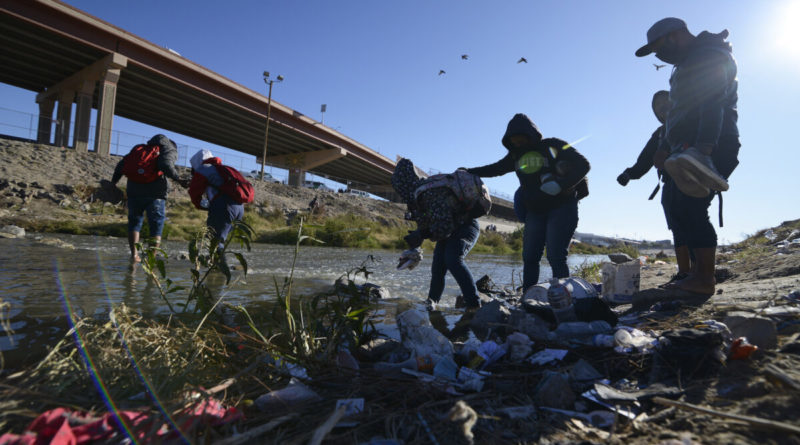 
Former Border Patrol Chief Rodney Scott has warned of a buildup in the number of people readying to rush the U.S.-Mexico border when the Trump-era Title 42 program that helped stem the tide of illegal immigration ends in just a few days.

“On Dec. 22, it’s almost like a starting gun’s going to go off,” Scott told NTD’s The Nation Speaks program in an interview, adding that intel sources in Mexico have warned that untold numbers of people are “literally backing up, they’re getting ready” to cross the border without authorization after Title 42 ends on Dec. 21.

But while Border Patrol agents are aware of the coming surge, Scott warns they’re limited in their ability to prevent people from crossing into the United States illegally and ending up in communities across the nation.

“Border Patrol is completely and totally overwhelmed,” he said. “It doesn’t matter where people live—this affects you. Every city, town, state, and across this nation is where the people and the narcotics and the other threats the cartel brings in is going.”

“And it’s just going to get easier for the cartel and harder on the Border Patrol agents” after Title 42 is lifted, he predicted.

‘The Flow Is Going to Increase’

Scott’s warning comes as an appeals court in Washington, D.C., ruled Friday to reject an appeal by 19 Republican-leaning states who wanted to keep the asylum restrictions put in place by former President Donald Trump at the start of the COVID-19 pandemic.

The Title 42 restrictions were used around 2.5 million times to block asylum claims and either stop people from entering into or expel them from the United States.

Last month alone, Border Patrol used Title 42 powers around 78,000 times to expel people from the country, Scott said. The process is “very quick” and saves around one hour of processing time per person, he estimated.

“That means that’s 78,000 hours they won’t be out patrolling the border, which means, word of mouth, the cartel is going to say there’s more border open. The word also gets out that now you’re being caught and released” and that “you’re not even being kicked out of the country,” he said.

“So the flow is going to increase,” he added.

White House spokesman Abdullah Hasan said immigration laws will continue to be enforced at the border even after Title 42 ends and the Biden administration will work to expand legal pathways for migrants but discourage “disorderly and unsafe migration.”

“To be clear: the lifting of the Title 42 public health order does not mean the border is open,” he said. “Anyone who suggests otherwise is doing the work of smugglers spreading misinformation to make a quick buck off of vulnerable migrants.”

Hasan added that there’s a “robust effort underway to manage the border in a safe, orderly, and humane way when Title 42 lifts as required by court order.”

The Biden administration has asked Congress for more than $3 billion in funding to help bolster border security as it prepares for the Trump-era restrictions to end.

An immigration reform framework that the Senate has reportedly been weighing involves concessions from both Democrats and Republicans, including extending Title 42 for at least one year while giving a path to citizenship for over 2 million people who entered the United States illegally as children.

The measure is widely viewed as a long shot, however, with reports based on unnamed officials familiar with the discussions indicating that the plan has failed to get enough backing before the end of this session of Congress.

But even if the broader immigration reform scheme under discussion in the Senate were to move forward, Scott said the proposed legislation would not “fix the border.”

“It says there’s a lot of money for border security but when you dive into it, it’s all about facilitating the entry of people into the country, it’s expediting the processing so that they get caught and released faster,” he said.

More border agents, while welcome, won’t help much, he said. That’s because they’ll be tied up in processing centers rather than patrolling the border, he argued.

“Without that policy shift, I don’t care how many agents you hire, you’re not going to be able to get out of this,” he warned.

Biden Administration Plans for More Illegal Aliens to Be Released

The Biden administration is planning for more illegal aliens to be released into U.S. communities to pursue asylum cases after the end of Title 42.

The Department of Homeland Security (DHS) recently released a six-pillar plan (pdf) on how it plans to cope with the challenges posed by the Trump-era restrictions coming to an end.

The agency estimates that 9,000 to 14,000 migrants could try to enter the country illegally each day when the restrictions lapse.

While other appeals could potentially be filed to try and extend Title 42 and the legal back-and-forth could go down to the wire, Republicans have warned of the consequences of letting the restrictions end.

“When Title 42 ends, weekly illegal border crossings are projected to be 98,000. That’s 14,000 crossings every day. 583 crossings every hour. America is being invaded!” Rep. Lance Gooden (R-Texas) said in a post on Twitter.

A number of GOP lawmakers have urged President Joe Biden to extend the emergency order, arguing that terminating Title 42 will “result in a complete loss of operational control over the southern border, a profoundly negative impact on border communities, and significant suffering and fatalities among the migrants unlawfully entering the United States.”

The group of lawmakers said in their letter to Biden that legislative action is probably the only solution, but that could take time.

The DHS, too, called for congressional action to fix what it described as an outdated and dysfunctional immigration system, in which “incentives are misaligned, asylum court backlogs stretch for years, and the border security challenge is exacerbated.”

Rep. Henry Cuellar (D-Texas) said Customs and Border Protection officials told him Wednesday that about 50,000 people are believed to be waiting to flood across the border once Title 42 is lifted.

Citing the constraints of a “decades-old immigration system that everyone agrees is broken,” DHS warned in the document that, with the end of Title 42, it expects a “significant increase” in the number of people seeking to cross the border without authorization, which would “substantially strain our system even further.”

With a system already strained beyond capacity amid a record surge in illegal immigration, DHS said it’s bracing for even more increases in human flows, which would “create further pressure and potential overcrowding” in various locations along the U.S.-Mexico border.

Besides expecting processing delays and disruptions at some points of entry into the United States, the DHS said it’s bracing for the release of illegal aliens into U.S. communities.

“With NGOs strained, there is a potential for a higher number of single adults and families to be provisionally released from DHS custody into communities without NGO or other sponsor support, pending the outcome of their immigration court proceedings,” the agency said.

Homeland Security Secretary Alejandro Mayorkas traveled this week to El Paso, Texas, which witnessed a large influx on Sunday after becoming the busiest corridor for illegal crossings in October.

Over 1,500 people crossed the U.S.-Mexico border illegally into El Paso in the early hours of Dec. 12, according to video from the scene and local media, in what reports say could be one of the biggest single crossings ever in the region.

Footage from the border shared on social media by news outlet El Paso Matters showed a massive group of migrants trekking through the water toward the other riverbank overnight and people huddling by fires to keep warm as they awaited processing.

Sleeping on the Streets

More than 5,600 illegal aliens were held as of Dec. 13 in the Border Patrol Central Processing Center, according to a city of El Paso dashboard. The center has a capacity of around 3,500.

Rep. Tony Gonzales (R-Texas) said in a Twitter post that the processing center was filled beyond capacity and that some people were sleeping on city streets.

“Migrants sleeping on the streets of El Paso! This is what the New Ellis Island looks like: 611 migrants out on the streets because the NGOs are out of capacity; every Border Patrol agent in processing centers overcapacity with 5,000 folks. This is exactly what Democrats wanted.”

Republicans have long accused the Democrats of advocating for an open-borders policy, though the Biden administration has repeatedly denied this claim.

Mayorkas has acknowledged that the situation along the southern border is “difficult,” while insisting that the Biden administration wants a “safe, legal, and orderly immigration system that is based on our bedrock priorities: to keep our borders secure, address the plight of children as the law requires, and enable families to be together.”

Mayorkas said recently that Republican rhetoric claiming that the “border is open” was helping fuel the influx.

“The political cry that the border is open is music to the smugglers’ ears, because they take that political rhetoric and they market it” to desperate migrants, Mayorkas told The Dallas Morning News.

Still, when Biden took office, one of his first actions was to cancel the Trump-era “Remain in Mexico” policy.

That rule meant that asylum-seekers were required to remain in Mexico while their claims for asylum were processed, with figures showing that the policy discouraged false asylum claims and decreased the flow of illegal immigration.

Here Are The US Cities With the Biggest Rent Hikes