San Francisco’s leniency on drugs is filling the street with lawlessness, according to the mom of a 32-year-old drug addict, who’s urging policymakers to enforce stricter laws that criminalize drug use and sales in the city.

“[Police] are on the streets and they’re not arresting anybody and the dealers are selling right in front of them,” Jacqui Berlinn said in an interview with California Insider, a show with The Epoch Times.

“They allow the addicts to use in front of other people … Other people who live there can openly see the addict’s using needles and smoking … acting out in the ways that are harmful to them or the public.”

Berlinn said her son is suffering from a fentanyl addiction, which has left him homeless and physically bent at a 45-degree angle.

“A lot of people say, you have to let him hit rock bottom,” Berlinn said. “My son’s rock bottom I believe is death. Right now, he needs to be coerced to get help because his fear of the withdrawals from this drug are so great.”

Berlinn’s son was introduced to drugs as a teenager and he became addicted after suffering from anxiety and depression.

Nowadays, Berlinn’s son wanders the streets between Oakland and San Francisco’s Tenderloin neighborhood since drugs are more accessible there.

In the past, Berlinn traveled throughout the Tenderloin neighborhood in search of her son, and she described the area as a “zombie apocalypse” with drug dealers on the corners of the street accompanied by homeless drug addicts.

Despite selling and consuming drugs in public, Berlinn has noticed police officers in the area allowed the lawlessness on the streets to continue.

“I feel like they’re enabling these people to commit a slow suicide,” Berlinn said. “The people that are there that are homeless and addicted are being preyed upon and they are deteriorating slowly. It’s a slow death. They’re out in the elements. Many of them have open sores and they’re in bondage to these drugs and San Francisco particularly helps keep them in that situation by not prosecuting the drug dealers, by allowing the open-air drug scenes.”

Berlinn once reported to police a naked homeless man in plain sight.

Police stated there was not anything they could do, as people were frequently naked in the area, she said.

Amid witnessing the drug crisis in San Francisco, Berlinn called for a statewide initiative to treat mental illnesses, rather than a county-by-county approach, stating homeless drug addicts come to San Francisco due to the “hands-off, live and let live policy.”

According to Berlinn, Proposition 4—a law that changed some lower-level crimes from felonies to misdemeanors—and other state laws has led to fewer arrests for carrying small amounts of drugs and shoplifting.

The last time of his arrest, Berlinn’s son expressed his desire to get sober. He made a call to check into a rehabilitation center but was turned away due to a lack of availability.

Temporarily, he was sent to a transitional sober living home outside of San Francisco where he eventually turned back to drugs.

The transitional sober living home offered no mental health services while allowing him to come and go as he pleased, Berlinn said.

Her son has shared that some addicts who’ve lived in the housing with no support services have overdosed while alone and nobody knew or was around to revive them.

“His greatest fear is detoxing from fentanyl because it’s supposed to be incredibly horrible,” she said. “He could even die from it if he’s not getting help and being monitored.”

Berlinn described the homeless drug addicts as people’s family members and loved ones who are trapped.

“They’re definitely not cracking down on these open-air drug scenes,” Berlinn said. “They’re allowing it to flourish and the solution I hear is safe injection sites. My son says that then there’ll just be more people like him on the street because they’re just making it easier to be a drug addict. They’re normalizing drug addiction.” 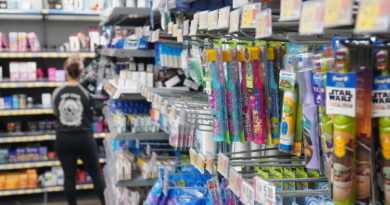