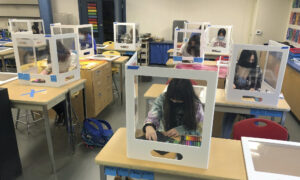 SANTA ANA—As Santa Ana Unified School District board members prepare to consider a plan for reopening for in-person instruction a year since the COVID-19 pandemic forced students into distance learning, a prominent University of California–Irvine professor of pediatrics said today it’s safe for students to return to campuses.

“I think they’re ready to open the schools and hope they would,” said Dr. Dan Cooper, a UCI professor of pediatrics, who has worked with Orange County schools on COVID-19 issues throughout the pandemic.

“Almost all of the data shows that schools can open safely if the schools follow all of the mitigation procedures,” Cooper said. “This is data coming in from all over the world.”

Cooper said it has been safe even when the case rates were higher.

“Look at the private schools in Orange County,” which have been open since the fall, Cooper said. “They’ve been open the whole time and their numbers are extremely low.”

Santa Ana Unified School District officials have said they wanted to see the positivity and case rates to come down in the ZIP codes hardest hit by the pandemic before considering a reopening.

The county has been focusing its efforts to do contact tracing and testing in the hot spots in Santa Ana, Anaheim and Garden Grove and now that vaccines are rolling in the attention has shifted toward inoculations.

As a consequence, the positivity rates in Orange County’s underprivileged areas of the county are now meeting orange tier metrics, though the county overall remains in the red tier, one step up above the most strict tier of purple.

Cooper has advocated for students to return to personal instruction.

“The sad news is that low-income kids have been hurt the most” by virtual learning, Cooper said.

Cooper acknowledged that it seems counterintuitive that children have not been major vectors of coronavirus, but studies show they have not been super spreaders in classrooms.

“They get it whether they’re in school or not,” Cooper said.

“A majority of teachers will be vaccinated, so that’s how you get over” the risk of infection of educators, Cooper said.

“Everything is easy in hindsight,” Cooper said, adding he understands the initial fear to allow students back into classrooms last year.

“It wasn’t illogical to close the schools… I can’t be too critical, but I do think it is clear from last year that when carefully done schools could have stayed open.”

Cooper said in one study of four Orange County schools, “We found no flu virus. No influenza. So these mitigation procedures are preventing influenza.”
And with spring here and the climate warming, schools can aid ventilation by opening the windows or doing more instruction outdoors, Cooper said.

Cooper added that Santa Ana Unified educators are “wonderful, great people. The teachers are great people,” and noted that he knows some principals who would personally deliver food to needy families during the pandemic.

“We all have one goal—what’s in the best interest of the kids,” Cooper said.

Santa Ana stands to receive about $16.3 million from the state to help with COVID-19-related expenses if the district reopens schools under a new state program to get students back in classrooms, according to a staff report.