A man who carried a gun onto U.S. Capitol grounds on Jan. 6, 2021, was sentenced on Aug. 1 to over seven years in prison, news outlets reported.

Guy Reffitt, 49, of Texas was sentenced to 87 months in prison.

It’s the longest sentence yet handed down to a person charged with a crime linked to the events at the Capitol. The previous record was 63 months.

U.S. District Judge Dabney Friedrich, the Trump appointee overseeing the case, said that Reffitt and others who committed crimes on Jan. 6 are a “direct threat to our democracy” and will be “punished as such,” WUSA-TV reported.

Reffitt told the court before learning his sentence that he was “a [expletive] idiot” and “I [expletive] up.”

But Friedrich wondered aloud if Reffitt was sincere, saying she expected to hear from him earlier, and Jeffrey Nestler, a prosecutor, said that the prosecution believed Reffitt’s statements were not credible.

A jury in March convicted Reffitt on all five counts: obstruction of an official proceeding, two counts of civil disorder, entering and remaining in a restricted building or grounds, and obstruction of justice.

Reffitt faced up to 20 years in prison. Prosecutors asked for 15 years behind bars. Reffitt’s lawyers said he should receive no more than two years imprisonment.

Reffitt did express sorrow in a letter to the court before sentencing, saying that he did not intend to carry out violence on Jan. 6. “I became energized by the crowd and I am not proud of what I did on the Capitol staircase that day,” he wrote, adding that “my regrets are immense.”

The judge described the letter as “carefully crafted,” noting Reffitt did not disavow the Three Percenters, a militia group of which he was a member, WUSA-TV reported. Friedrich also said Reffitt in the missive offered “really troubling” comparisons between Jan. 6 and the American revolution in 1776, and later called threats he made against family members “highly disturbing.” She noted that he pointed a gun at the head of his wife in 2020, pointing to remarks the wife made about the incident in a podcast.

Reffitt, an oil rig manager and petroleum consultant who was laid off during the COVID-19 pandemic, arrived at the west side of the Capitol around 1:50 p.m. on Jan. 6 and “charged up the Capitol steps towards Capitol police officers,” according to prosecutors. After being sprayed with chemicals by law enforcement, and struck with rubber bullets, Reffitt left, went back to his hotel, and departed for home.

Reffitt, a member of a Texas militia group called the Three Percenters, was armed with a pistol in a waist holster, according to prosecutors. Reffitt has said he took a gun into Washington but disassembled it to comply with the law. He never brandished the weapon.

After returning from Washington, Reffitt bragged about joining the Capitol breach and was making plans to join a future event of a similar nature, according to communications obtained by the government.

Reffitt during a Jan. 11, 2021, discussion with his daughter, Peyton, and his son, Jackson, both teenagers, said that anybody who turned him in “would be traitors” and “traitors get shot,” according to a recording captured by his son.

Jackson soon reported his father to the FBI.

Jackson testified during Reffitt’s trial that he was “scared” for himself and his sister after that conversation, so he went to the government.

Reffitt’s daughter said she did not feel threatened, and submitted supportive statements to the court along with her sister, Reffitt’s wife, one of his daughter’s boyfriends, a woman who said he helped her recover from addiction, and five longtime friends.

First Defendant to Go on Trial

Reffitt was the first Jan. 6 defendant to see their case go to trial.

Jurors quickly returned a unanimous verdict, setting the stage for all the unanimous convictions that have since followed in the District of Columbia, where the overwhelming majority of voters are Democrats.

As of July 6, 10 individuals have been found guilty. The only acquittals have come from a judge during bench trials.

Video footage showed Reffitt near the Capitol on Jan. 6 wearing a blue jacket, a black vest, and a helmet with a Go Pro-style camera attached, washing his eyes out after being hit by chemical spray.

Reffitt has acknowledged to FBI agents that he went onto Capitol grounds. He was not accused of entering the Capitol. 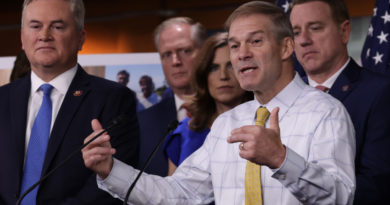