The Department of Justice (DOJ) argued that the founder of the Oath Keepers group who allegedly entered the Capitol building on Jan. 6 can’t blame former President Donald Trump for criminal acts during the breach, according to a recent filing.

“President Trump did not have the authority to permit or authorize a conspiracy to forcibly oppose the authority of the government or the execution of the laws of the United States, nor could he have lawfully sanctioned the attack on the United States Capitol on Jan. 6 or any of the other criminal conduct allegedly perpetrated by defendants,” federal government prosecutors wrote in their filing submitted July 29 in the U.S. District Court for the District of Columbia.

The DOJ is seeking a ruling to prevent attorneys for Oath Keepers founder Stewart Rhodes and other members of the group from being able to make that argument in opening statements to the jury or while questioning witnesses.

“Any ‘public-authority’ defense put forth by the defendants would fail for two reasons: no government agent possessed actual authority to order the defendants’ criminal actions, and, in any event, it would have been objectively unreasonable to rely on any such order,” DOJ lawyers added in the filing about the case,” adding that the “defendants cannot satisfy any part of the entrapment-by-estoppel test.”

“The defendants were not actively misled. Neither in his speech on January 6, 2021, nor beforehand did President Trump or any other government actor purport to interpret the scope of the statutes the defendants are charged with violating,” they wrote.

Prosecutors also want to block lawyers for Rhodes and other Oath Keepers members from claiming that Capitol Police officers and other law enforcement supported the defendants’ actions on Jan. 6, 2021, because they allegedly did not try to stop them from entering the Capitol.

Rhodes and other members of the militia group lost a request to dismiss their criminal charges in June. The judge also blocked (pdf) their request to move their trial to Alexandria, Virginia, from Washington, D.C., last month.

The DOJ in January 2022 charged (pdf) Rhodes and 10 others with “seditious conspiracy” in connection to the Jan. 6 incident at the Capitol.

In an exclusive interview published last month, Rhodes told The Epoch Times that he wants to testify in front of the House Jan. 6 committee during a live broadcast to refute the panel’s “pack of lies.”

“If I were given a chance to give an opening statement, I’m writing up what I would give them,” Rhodes said on July 10. “If they decline to accept my offer, I’m going to go ahead and publish my opening statement.”

Members of the Jan. 6 committee, which has been derided by Republicans as a partisan witch hunt, “should jump at the opportunity, but they won’t because they don’t want that,” Rhodes argued. “What they want is what you’ve seen, which is just a scripted, controlled, pre-screened show trial. They’re only going to put people in front of the public that they know are going to say what they want them to say.”

The Epoch Times has contacted Rhodes’s attorney, James Bright, for comment on the latest filing. Rhodes’s trial is scheduled to start on Sept. 26. 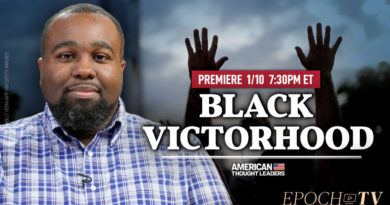 Adam Coleman on Black Victorhood and the Nuclear Family