LOS ANGELES—Splatters of blood and fake $100 bills were visible on the left aisle of the Los Angeles City Council chamber Aug. 9 afternoon, remnants from another raucous meeting that started with protesters voicing displeasure at an ordinance to ban homeless encampments within 500 feet of schools and daycare centers and ended with one arrest, three injured police officers and a final vote to approve the measure.

The council voted 11–3 in favor of the measure on the third and final time that it came up for a vote, with Council Members Mike Bonin, Marqueece Harris-Dawson, and Nithya Raman dissenting.

“We cannot accept that as a regular way to conduct ourselves,” Council President Nury Martinez said. “I think for those of us who have been with us a number of years, I’ve never witnessed anything like this.”

As they did last week, opponents interrupted the meeting with chants and shouts in the council chamber.

But on Tuesday, during public comment, a woman attempted to climb over the barrier separating the council from members of the public. While police attempted to take the woman into custody, a man tried to prevent officers from arresting her—he was in turn arrested on suspicion of vandalism and resisting arrest.

The woman was not taken into custody, according to Capt. Elaine Morales of the Los Angeles Police Department, who added that she was pulled away from police by other protesters.

Martinez then called for a 20-minute recess. Police with riot gear circled the chamber while protesters chanted and made speeches until police issued a dispersal order. The council finished the meeting with only members of the media present.

“Jumping over a barrier and putting other peoples’ lives at risk, that cannot be the norm around here,” Martinez said. “We cannot legislate in fear. I certainly will not do that. But we cannot tolerate this kind of behavior and continue to disregard decorum here in our council chambers and our safety.”

After the meeting, Councilman Kevin de León was examining the scene in the chamber, telling a cameraman to make sure he got a close-up shot of the blood. Meanwhile, Martinez was at the public speaker’s podium, taking a look at just how close the protester got to make a run at the council.

De León told City News Service that in his lifetime, he’s “never witnessed or experienced such behavior by a group of individuals who sought to inflict violent, physical harm” on Martinez.

“I wish that they would channel that energy to join with us to build more housing, to acquire more housing, to get our unhoused neighbors off the street sooner rather than later,” de León said. “They seem to focus on performative art.”

Martinez, speaking to reporters after the meeting, said that in her three years serving as council president, she has become used to attacks from the public.

The audience at the meeting was confrontational from the start, booing the council members as they walked in and continuously shouting obscenities at them.

“I think there are still people uncomfortable with women leading, and women being so up front,” Martinez told reporters after the meeting. “I’m incredibly honest—at times too honest with what I do. But that’s my job. That’s what I was elected to do.”

The new amendment is a blanket ban on encampments within 500 feet of all schools.

Councilman Joe Buscaino originally proposed the idea last year, and it failed to gain traction. But the issue was revived earlier this year, in part at the urging of Los Angeles Unified School District Superintendent Alberto Carvalho, who said teachers, principals, and parents have expressed concerns about homeless encampments near campuses.

Council members sought to distinguish between the purpose of the ordinance and the overarching goal of solving the city’s homelessness crisis. They argued that the expansion of the 41.18 ordinance was simply a measure to protect the safety of students—and nothing more.

“To have such energy wasted, organizing people to come here to raise this question—yet to be so far off point is amazing,” Councilman Gil Cedillo said. “It’s something to witness, to see such energy misguided, misdirected, a lack of strategy and tactics. What this provision is about parents and children.”

Opponents of the ordinance claim that some smaller schools and daycares out of the thousands in Los Angeles may not look like a building to which the encampment ban perimeter applies to, especially if people set up a block away or around the corner.

“It allows opportunistic politicians to push their unhoused constituents from block-to-block, district-to-district while providing no shelter, no housing, and no services,” said Ashley Bennett, co-founder of Ground Game LA, in a speech outside City Hall before the meeting.

Bonin, the only council member to vote against the measure all three times, said it will make the homelessness crisis worse.

Bonin added that the council hasn’t done any studies of the impact of the ordinance’s expansion, nor did it highlight specific locations and addresses where the encampment ban would be in effect.

He also claimed that the vote would make the city more vulnerable to lawsuits.

Data from Kenneth Mejia, a candidate for city controller, found—based on his own mapping—that the council would effectively be banning encampments on 20 percent of the city’s sidewalks and 48 percent of the entirety of District 1.

Bonin shouted back at O’Farrell to show him a map.

O’Farrell responded: “We don’t need a map. We know where ours are. And you should as well.”

Martinez told the media that a “very small minority of folks” continue to disrupt meetings on the 41.18 ordinance, and that parents and other stakeholders who support the expansion didn’t show up to the meeting because they are at work and might be scared of speaking up.

“Did you see this crowd?” Martinez said. “Would anybody in their right mind come here and voice their opinion? Especially if you’re a mom, who doesn’t speak the language, who doesn’t understand how the city council works? It’s petrifying. It’s like asking my mom to come down here, without even understanding how this place works. It’s not fair.

“There are folks who grew up with the privilege of understanding or having the ability to be exposed to government. Not all of our residents have that kind of background.”

De León added that he didn’t see any homeless residents in the audience, hinting that those disrupting the meeting Tuesday weren’t truly the stakeholders impacted by the ordinance.

“It’s easy to go on and take advantage of other people’s misery and speak for them, on their behalf,” he said to the media.

About 90 minutes before the meeting, Sabrina Johnson sat outside the chamber with a red marker, writing signs that read “House Keys Not Handcuffs” and “41.18 Sucks.”

Johnson, who works at a retail store and spent her day off at City Hall to protest, said she would “rather be anywhere else but here, honestly.” But “guilt” brought her downtown, she said.

Johnson was concerned about how few places exist in the denser parts of Los Angeles where there isn’t a school or a daycare nearby. 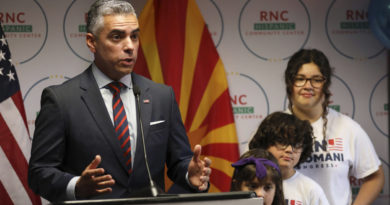 Republicans Gain 2 More Seats in House, 4 Seats Away From Majority 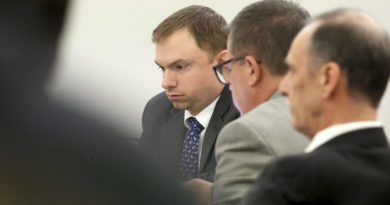