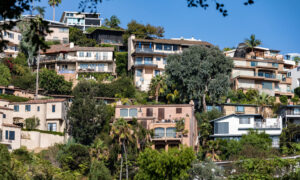 When Janice Hobbs set out to create her dream home 10 years ago in Laguna Beach, California, she never imagined the opposition and costly delays she would face from neighbors and city regulations.

But a decade later, there’s still no completed home. Instead, negotiations, redesigns, lawsuits, and appeals have cost Hobbs hundreds of thousands of dollars—and her unfinished house sits unoccupied on a prime, front-row lot overlooking the ocean.

“This was my dream home. This was saving up my whole life to be able to build this house. It’s a wonderful location and the view is fantastic, and there should be a beautiful home there,” Hobbs told The Epoch Times.

Hobbs, 65, has spent years arguing with neighbors and the city’s Design Review Board (DRB), a panel of residents that oversees the construction of new and existing developments, over the height of her proposed roof. Neighbors say the project would block their view, while Hobbs defends it as within her rights as property owner.

The board, established in 1972, is in charge of reviewing requests for revitalizing existing buildings and new construction projects, in line with the coastal town’s mission to retain its historic charm. In January, the DRB unanimously approved Hobb’s latest development plans. But on March 23, neighbors gathered before City Council to appeal the ruling, adding 101 additional items to their list of complaints.

The neighborhood appeal was shot down in a 3-2 vote, following a contentious hearing that included nearly two hours of public comments from a handful of residents. It was a victory for Hobbs, but “incredibly stressful,” she said.

During the hearing, neighbors presented videos they created showing how Hobbs’ proposed plans would not provide “view equity” for the houses behind the property, using the computer-generated voice of Morgan Freeman to narrate the production.

Alan Boinus said neighbors had been presented more than four different sets of plans, four different architects, six DRBs, and three council hearings over the past eight years “because of time delays and confusing choices made by the applicant.”

“Council needs to sort out two distinctively different views and findings from two different DRBs,” he said. “We contend this project cannot be both a new home and modifications without prior approval, when conditions for the prior approval were never met.”

In 2015, the DRB, which was made up of different members at the time, approved Hobbs’ plan—but only if she kept the original height of the previous roof and built her home down the hill, instead of up.

“This was prior approval with conditions. So conditions were never met by the applicant, and the applicant seems to cherry-pick what she likes and doesn’t like from past direction,” said Boinus.

But Hobbs believes if neighbors wanted to retain the view, they should’ve purchased the property themselves.

When Hobbs purchased the land in 2011, there was already a home there, with a flat roof—and the surrounding neighbors wanted her to keep it that way.

She said it took five years for her to receive DRB approval to tear down the old building and replace it with a new house. She called the process “a horrendous and awful experience—just the worst.”

Hobbs, a financial planner, has lived in Laguna for 31 years, five blocks from the project, and still lives there while she waits for her new home to be finished. She’s proud of the design, though weary of how much she’s had to change it to appease the city.

“We designed a beautiful home. It’s not the best, because you end up nipping and tucking and cutting, and can end up with what your neighbors have left you with after they take a hatchet to it,” Hobbs said.

She expressed frustration that her neighbors continue to add items to their ongoing appeal, despite the board’s approval of her plan two months ago. “You’re supposed to have to write out what your reasons for appeal [are], and there’s usually three or four things—my neighbors have 101 items they are appealing.”

Some of those items include issues with the types of plants she wants to place around the house, the geography of the garage, the environmental impact of the project, and the difference between the new remodeling and its original proposal.

Hobbs noted that each design board, whose members are elected to two-year terms, is different. In 2015, before one of Hobbs’ hearings to install a pool as part of her house’s design, a previous DRB voted to ban swimming pools, only to repeal the ban after a month.

Village Laguna is the city’s oldest volunteer-activist group, founded in 1971. Its members seek to preserve Laguna’s village-like character by blocking large, high-rise development projects and endorsing city council candidates who most align with their vision.

Village Laguna President Anne Caenn told The Epoch Times that her organization would not take an official stance on Hobbs’ project. Personally, however, she thinks “it just is a massive project, and it’s blocking the neighbor’s views,” which she called “very unkind.”

“It’s really overbuilding for the lot, and the biggest issue is that the neighbors are losing their view. And living in Laguna Beach, having a view of the ocean is really your goal in life,” Caenn said.

At the March 23 meeting, Councilmembers Toni Iseman and George Weiss were the dissenting votes. Weiss agreed with the neighbors that the height of the roof needed to be reduced from 21 feet, but felt that Hobbs should be able to retain other aspects of her development plans.

“Ms. Hobbs doesn’t lose anything by lowering the project as far as I could see,” said Weiss. “So I think, you know, it’s a win-win if we could lower the height, and her views are not affected at all.”

Mayor Bob Whalen agreed with Weiss, but ultimately voted against the appeal to side with the DRB’s approval.

Resident Cindy Shopoff phoned in to the meeting and called the entire hearing “a circus.”

“This has been a debacle for Jan and for her house,” Shopoff said.

Councilmember Peter Blake voted against the neighbors’ appeal, siding with Hobbs. He said the hearing was purely political and blamed the city’s activists—mainly Village Laguna—for impeding any new developments.

“You would think that given all the amount of production and everything, all the deception, [and] the Morgan Freeman [narration],” that the appellants would have also included videos or photos of the legitimate view losses, Blake said, adding, “The days of people taking away property rights are over.”

In 2019, the councilman introduced a proposal to dismantle the DRB, citing arbitrary and time-consuming verdicts for projects. He made it his mission when he was elected to revamp the design process.

“We’re not going to reduce this house by 21 inches,” he said. “And I think that she’s done everything she can for nine years. She has earned this house. It’s her dream house, and we need to give it to her.”

Pelosi to Decide This Week on Formation of Panel to Probe Jan. 6 Breach