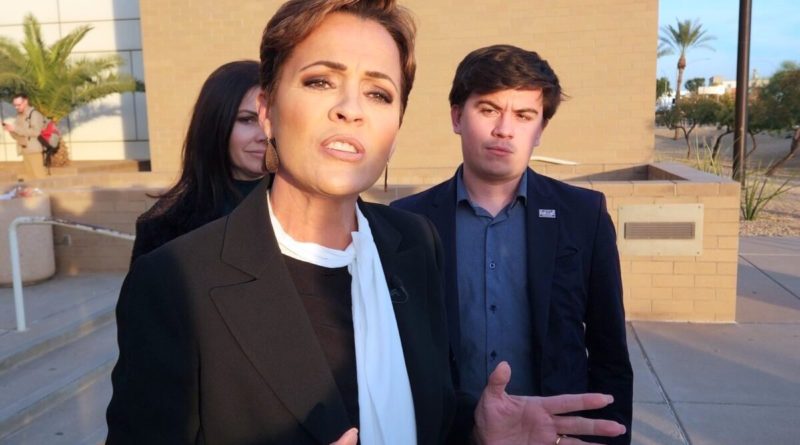 MESA, Ariz.—Attorneys representing Republican gubernatorial candidate Kari Lake and local election officials squared off in a Mesa courtroom on Dec. 22 with Lake’s side accusing the officials of “gaslighting” the public to believe problems on election day were minimal.

Attorneys on the other side, meanwhile, called for a “day of reckoning” accusing Lake’s team of coming “into this courtroom, without evidence.”

Lake had sued Democrat gubernatorial candidate Katie Hobbs in her capacity as Arizona Secretary of State, as well as Maricopa county officials, alleging severe and intentional problems with the way the Nov. 8 election was conducted, seeking a new election or to be declared the winner.

According to Lake’s attorneys in their lawsuit, the number of “illegal votes” cast in Arizona’s general election on Nov. 8 “far exceeds the 17,117 vote margin” between Lake and Hobbs.

Officials certified the state canvas for Hobbs earlier this month.

“There’s no doubt that it caused long lines,” he said, but the county “repeatedly downplayed” the situation.

“I’ve never seen anything like this … This is about trust,” Olsen said.

Of those ballots, Parikh said 48 in a batch of 113 contained 19-inch images printed on 20-inch paper, which could not happen by accident, and would cause the printers to reject them.

The county reported at least 70 of the 223 polling places in Maricopa County experienced technical issues related to printers having “non-uniform” printer configuration settings, causing them to be rejected by tabulators.

On Dec. 21, Scott Jarrett, the 2022 Maricopa County general election co-director, testified that the tabulators and printers were programmed to receive 20-inch paper ballots per a 2022 election systems manual.

He denied the county was using 19-inch ballots, later changing the term to 19-inch “definitions.”

Thomas Liddy, an attorney for Maricopa County, meanwhile, told the court on Dec. 22 he would pursue legal “sanctions” against Lake regardless of how the judge rules in the civil case.

“You reap what you sow,” Liddy said in his closing remarks following two days of witness testimony in the Superior Court of Maricopa County in Mesa.

Liddy blamed Lake’s campaign for bringing the 70-page lawsuit “without evidence” and Arizona Republicans for urging voters to cast ballots in person on Election Day, calling it “political malpractice.”

“Who goes out and tells their voters don’t vote on day one of early voting—day two, day three—all the way up to day 26 of early voting? Wait until the last second. That’s political malpractice,” Liddy told Judge Peter Thompson.

“Lord forbid, don’t ever put your vote in the ballot box. People were [intimidated] on Election Day. That’s not on Maricopa County—that’s on the Kari Lake campaign.”

Liddy said, “When people come into this courtroom, without evidence, there should be a day of reckoning.”

“Now this has been happening all over the country, your honor, and it’s got to stop. It has got to stop right now. And the place to stop it is right here in your courtroom, your honor. Right here, in Mesa, Arizona.

“We’ve got to get back to respecting elections because that’s all we have, your honor. Different religions, different creeds, different ethnicities, different backgrounds.

“There’s only one thing that makes us Americans. And that is we believe in choosing our own rulers—our own governors. Our own mayors. Our own presidents and we do that through elections,” Liddy said.

Following closing arguments, Judge Thompson took the case “under advisement” and would render a decision “forthwith.”

After the trial, Lake made a brief statement outside the courthouse, saying her attorneys “proved without a shadow of a doubt that there was malicious intent that caused disruption so great it changed the result of this election.”

“We provided expert testimony—experts—the other side brought in activists to try to save face,” Lake said. “They admitted that they’ve known about these ballot problems. Our elections are a mess in this country, and I am so happy to stand up and say, no longer will we, as Americans, put up with this.”

“We demand fair, honest elections, and we will get them,” Lake said.

Baris told the court that a random sampling of Maricopa County voters saw a dramatic 20-percent drop in completed surveys in the 2022 election, indicating voters “didn’t complete the questionnaire because they didn’t vote.”

“I believe it was substantial enough to change the leaderboard [so that] Miss Lake would be out. In my professional opinion, it would have changed the outcome of the race.”

Baris told the court he had “no doubt Lake won” the election.

Defense witness Kenneth Mayer, a professor of political science at the University of Wisconsin, Madison, testified on Dec. 22 that Baris based his conclusions on “assumptions and speculation” and faulty math.

“He [Baris] is doing his math incorrectly about how he thinks people would vote. It is wrong to make inferences about why people didn’t vote,” Mayer added.

Allan Stein is an Epoch Times reporter who covers the state of Arizona.