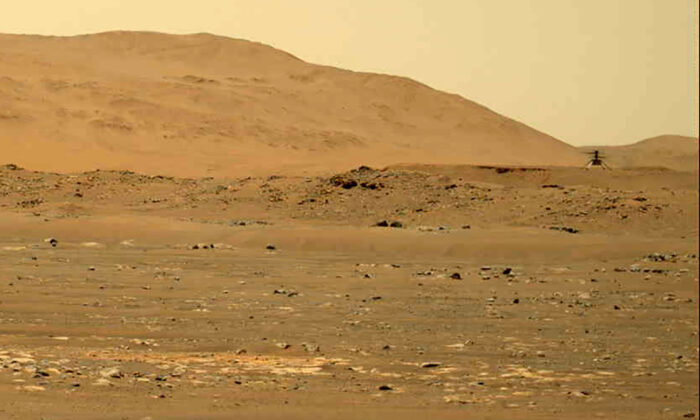 In this image taken by the Mars Perseverance rover and made available by NASA, the Mars Ingenuity helicopter (R) flies over the surface of the planet on April 30, 2021. (NASA/JPL-Caltech/ASU/MSSS via AP)

BETHEL, Maine—A Maine museum will play host to a chunk of rock it said is the largest intact Mars rock on Earth.

The Maine Mineral & Gem Museum said the specimen weighs 32 pounds and is about 10 inches at its longest point. The museum said the rock was the result of an asteroid impact on the surface of Mars that ejected material into an Earth-crossing orbit in space.

There are less than 500 pounds of Mars rock known to exist on Earth, the museum said.

The rock is known as “Taoudenni 002.” The Bethel, Maine, museum said it will include the rock when it opens to the public on Sept. 1.

The museum said it is planning a reception with limited capacity on Aug. 31 to celebrate the acquisition of the rock. Two scientists from the National Aeronautics and Space Administration are expected to attend, the museum said.

Biden Visits Buffalo After Shooting, Says ‘Evil Will Not Win’