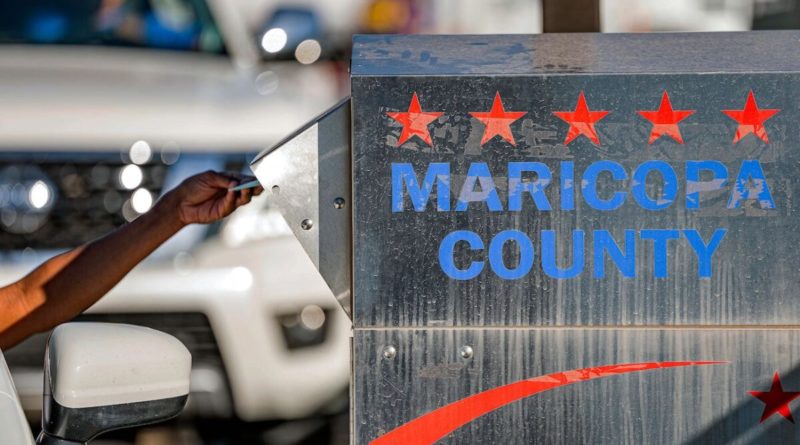 
Arizona’s Maricopa County on Sunday responded to a request from the office of Arizona’s Republican Attorney General Mark Brnovich, which had asked for details from the county on how it had handled the election after a “plethora of reports from election workers, poll watchers, and voters, including the county’s admission of widespread printer problems,” as well as that “poll workers appeared to be improperly trained on ‘check-out’ procedures.”

In a lengthy report (pdf), the Maricopa County Elections Department said that the county had “followed state and federal laws to ensure every voter was provided the opportunity to cast a ballot in the elections.”

Arizona gubernatorial candidate Kari Lake and other Republicans have also claimed that voters have come forward to reveal multiple issues they faced when casting their ballots on Election Day and that those issues effectively disenfranchised Arizonans.

Arizona Democratic Secretary of State Katie Hobbs, who was challenging Lake, declared victory earlier this month. Lake has not yet conceded.

“Coming out of the Thanksgiving holiday, I’m grateful for County staff who worked with great care and resolve to answer questions from the Arizona Attorney General’s office about the November General Election,” Board of Supervisors Chair Bill Gates, a Republican, said in a statement on Sunday.

“In the coming days, we will provide additional facts and transparency to the AG and other interested parties. Most importantly, we will fulfill our statutory responsibility to canvass this election on Monday,” the statement added.

The report states that Maricopa County’s “Door 3 procedures” are lawful and that “every single one of the 16,724 legal ballots deposited in secure Door 3 on Election Day was counted.”

Door 3 refers to a secure ballot box that officials said voters could place their ballots into on Election Day to be counted later.

Elsewhere, the report states that a total of 206 voters checked in at one location and then voted at a second location on voting day.

“Of these 206 voters, 84 successfully checked out of the first voting location and checked in at the second location. Since these 84 voters successfully checked out of their first location, they were issued a standard ballot at the second location,” the report said. “Poll workers were aware of this check-out procedure and were able to implement it early in the day on Election Day.”

“Voters commonly ask to spoil their ballots and poll workers are very familiar with the process of issuing them a new ballot,” the report said.

The remaining 122 voters that voted at two locations did not check out at their first location and were given a provisional ballot when they arrived at the second voting location, the report said.

“The ballots for the remaining 11 voters were not counted because the Elections Department could not verify that a printing issue occurred at the voter’s first location and/or that there was a variance between the number of check-ins and the number of ballots counted at the first voting location.”

Elsewhere, the report addressed issues with printers that surfaced on Election Day and which printed ballots that were too light for tabulators to read.

The report said that a review had found that 43 vote centers had been confirmed to have suffered from an intermittent printer issue.

Maricopa County includes Phoenix and around 60 percent of Arizona’s population.

Elsewhere on Sunday, Tom Liddy, head of Maricopa County’s civil division, in a letter (pdf) to the Arizona Assistant Attorney General Jennifer Wright, who heads the Elections Integrity Unit, alongside the report wrote that the failure of printers to print ballots capable of being read by precinct-based tabulators cannot violate elections laws because all voters were “still provided reasonable, lawful options for voting” and the county’s contingency plan, of instructing voters to place their ballots into a ballot box to be tabulated later is “used by eight counties in the state.”

The Board of Supervisors said it will hold a public meeting to canvass the results of the election, as required by law, on Nov. 28 at 9:30 a.m.

State certification is set for Dec. 5.