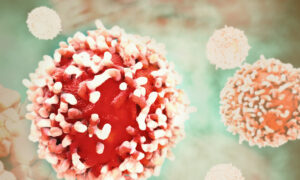 A study on dogs, conducted by researchers at the University of California, Davis, has found human immune proteins to be moderately successful in controlling lung cancers without causing major sensitivities and toxicities, showing potential for the protein’s use in humans. Surgical oncologist Dr. Robert J. Canter and canine oncologist Robert B. Rebhun co-authored the study, along with scientists from other institutions.

The study was published in the Journal for ImmunoTherapy of Cancer, an open-access, peer-reviewed journal, on June 9.

“The cancers that afflict dogs, including sarcomas, brain tumors, lymphoma, and melanoma, are incredibly similar to cancers that humans develop,” said Canter, who is chief of the UC Davis Division of Surgical Oncology and co-director of the university’s comparative oncology training program.

Twenty-one dogs with advanced lung metastasis (the equivalent of stage 4 cancer) were treated with an inhaled form of interleukin-15 (IL-15), an immune protein that triggers specific immune cells to act against cancers.

After two weeks of the inhaled treatment, researchers found tumors shrank dramatically in two of the dogs, including one that went into complete remission for more than a year.

In five other dogs that had rapid-growing cancers, the growth rate was reduced and became stable, though the cancer was not cleared.

The moderate success of the study demonstrates potential for future treatment of cancers using IL-15 for humans.

However, more studies are needed, said Rebhun, a professor at the UC Davis School of Veterinary Medicine’s Department of Surgical and Radiological Sciences. “The inhaled IL-15 responses that we’ve seen in dogs are better than prior human studies, but clinical benefit is seen in less than half of the dogs,” he said, reporting an overall response rate of around 40 percent.

Though the treatment was limited to 14 days, the researchers were encouraged to see that the IL-15 therapeutic effects were “prolonged despite receiving a limited 2-week window.”

IL-15 was previously seen as a potential treatment for cancer in humans. The cytokine’s signaling increases proliferation and division of B and T cells—two immune cells that are able to mount targeted immune responses against pathogens and cancers.

The team found that dogs breathing in the IL-15 did not report major sensitivities such as fever or pulmonary abnormalities—a major concern given IL-15’s immune toxicity in humans—although some owners reported coughing after inhaling.

The finding indicates that the treatment is mostly safe to use in dogs, with hopes that it is also safe for humans.

Additionally, the report speculates that the moderate success in dogs may be due to treatment with human IL-15, rather than canine IL-15.

The clinical response may be even greater once dogs are treated with their own IL-15, as “canine cytokines are more potent in stimulating immune responses” in canine immune cells. This indicates even greater potential for humans treated with human IL-15.

Current use of IL-15 in people has led to “potentially favorable immune responses but has not yielded good tumor responses,” Rebhun said. This indicates that treatment by “combining IL-15 with other immunotherapies may result in additive or synergistic responses.”