According to a proposed scoping plan, New York residents might be forced to—as early as 2030—replace their boilers with electric heat pumps, drive electric cars, and switch to electric appliances for cooking, drying clothes, or heating water.

In 2019, then-Gov. Andrew M. Cuomo signed the Climate Leadership and Community Protection Act (Climate Act), “one of the most ambitious climate laws in the world.” The law aims to reach a net-zero emissions economy by 2050. It also pledges to reach 70 percent of electricity from renewable sources by 2030 and 100 percent zero-emissions electricity by 2040.

On Dec. 30, 2021, the Climate Action Council created by the law released a 341-page draft scoping plan for public comments. Early this month, the council extended the public comment period from June 10 to July 1 due to “significant feedback” with more than 18,000 public comments.

“Electrification of space and water heating with high-efficiency heat pumps is a viable, cost-effective approach to decarbonizing operations for nearly all buildings in New York,” the draft scoping plan stated.

Almost all passenger cars sold in the state must be electric cars by 2030, according to the plan.

“By 2030 nearly 100% of LDV [light-duty vehicle] sales and 40% or more of MHD [medium- and heavy-duty] vehicle sales must be ZEVs [zero-emission vehicles] and a substantial portion of personal transportation in urbanized areas would be required to shift to public transportation and other low-carbon modes,” the plan declared.

New York already has a law in place requiring all new passenger cars and trucks sold in the state to be zero emissions by 2035. Governor Kathy Hochul signed the law on Sept. 9, 2021.

The plan urges to reach a goal of 3 million zero-emission vehicles on the roads by 2030, even though as of November 2021, only one-half of one percent of the over 9 million registered light-duty vehicles in New York were zero-emission.

Roger Caiazza, a meteorologist and a former executive director of the Environmental Energy Alliance of New York, said affordability and reliability are the two biggest concerns for the “electrify everything” plan. He has worked in the environmental field for over 40 years.

The estimated cost of converting to heat pumps is $20,000. However, Caiazza said heat pumps alone don’t work well, homeowners have to do window treatments and improve insulation to make houses warm in winter.

Germany is a world leader in terms of the energy transition. In 2020, 50.5 percent of electricity generation was from renewables, a record high. However, the electricity prices in Germany are among the highest in the world. It’s been reported that the high prices are partly due to mandatory support for renewable energy sources.

“The other piece is reliability,” said Caiazza. “Basically, wind and solar are intermittent. And the resources you need to cover–when the wind isn’t blowing and when it’s night–get really expensive. … You’re gonna need enormous amounts of storage for that. And that’s going to add costs.”

“I think there’s going to be issues with blackouts,” said Caiazza.

Some are concerned with the future mandates pushed by the draft scoping plan because once the scoping plan is adopted, state agencies would issue rules or regulations to compel industries and residents to meet the standards.

The Greene County Legislature identified that the plan “mandates over a hundred (if not several hundred) different measures affecting all aspects of our daily lives and community activities.”

“The Greene County Legislature supports prudent action on energy efficiency,” the County Legislature Chairman Patrick Linger said in a statement. “However, the mandates outlined by the Climate Action Council take us down a narrow, expensive and risky path, centered on limiting homeowner choice, preventing research and innovation, and electrifying everything.”

To achieve its goal, the plan advised mandating regulations and incentives, as well as investment in infrastructure and new technology research.

Land for Solar and Wind Farms

Another county is concerned with the enormous amount of land needed for solar farms.

“My thing is, for me and my board, what we have talked about is the solar panels,” Madison County Board of Supervisors Chairman John Becker told The Epoch Times. 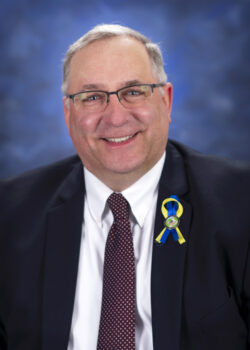 The County Board officially announced its opposition to the draft scoping plan and sent its resolution to Gov. Kathy Hochul, the state legislature, and all others “deemed necessary and proper.”

“If we cover even our marginal farmland with the solar panels, we’re going to be in big trouble,” Becker said. Madison is a rural county located in central New York State.

Becker said there’s currently a water shortage to the west, and lands in the northeast have an abundance of fresh water which would be necessary for vegetables, beef, and dairy.

“Covering even marginal farmland with these things that are not recyclable, and most of them come from China,” said Becker. “What are we really accomplishing here?”

He pointed out that shipping these panels from China would produce a lot of carbon emissions.

Solar and wind require a lot of land to generate electricity compared to natural gas or nuclear plants due to their low energy density and intermittency. According to a report from the National Renewable Energy Laboratory with the U.S. Department of Energy,  5–7 acres are needed to produce one megawatt (MW) of solar electricity. A company that sources land for solar farm developers also states that generally, a one-megawatt solar farm requires 4–7 acres.

Wind farms are even worse. For example, the Alle Catt wind farm in western New York covers 30,000 acres with a 340 MW capacity, 88 acres per MW. Capacity doesn’t mean electricity generated because wind or solar can’t operate 24 hours a day. Wind and solar’s capacity factors, a measure to examine how often a plant is running at maximum power, are much lower than those of natural gas, coal, or nuclear.

Becker urged people to submit their comments by the deadline of July 1.

Becker said he recently talked to a couple of commissioners in the Public Service Commission and was told the electricity prices would go up significantly, “minimum of 30 percent,” because of the investment required for the transition.

“Now our electricity rates are going to be really high. That’s going to really turn up the heat for people to leave. And if businesses can’t compete with cheap electricity, then they’re going to be leaving. This makes no sense,” said Becker. “We’re doing all this in the name of clean energy in Pennsylvania and Delaware, Massachusetts. And everybody around us isn’t doing the same thing. So what are we doing here? It doesn’t make any common sense.”

“At a cost of hundreds of billions of dollars to New Yorkers and untold costs to the economy, we are barreling full speed ahead to further crush the affordability of living for families, drive up the cost of doing business, and destroy economic opportunity,” O’Mara said in a statement.

Some union leaders echoed the concern.

“The Draft Scoping Plan seeks to decommission existing gas networks that could significantly impact business and manufacturing operations,” said Randy Wolken, President and CEO of the Manufacturers Association of Central New York. “Natural gas is a highly reliable and resilient energy source providing base power when renewables are not available for use. Beyond the reliability of the energy system, this new plan would impose significant costs on businesses and consumers.”

The plan said the cost would be between $290 billion and $310 billion based on different scenarios, but the benefits would be from $400 billion up to $420 billion. That means the net benefits are estimated at $90 billion to $120 billion.

Between $50 billion to $120 billion benefits are attributed to health benefits from improved air quality “based on reduced mortality and other health outcomes,” according to the plan. An additional $40 billion of the estimated benefits go to “health benefits of increased active transportation (such as walking and cycling).”

James Hanley, a senior policy analyst at the Empire Center, called the claim that benefits outweigh the cost “false.” Empire Center is an independent, non-partisan think tank based in Albany, New York.

“How much of that benefit goes to New York? It’s impossible to say. But New York contributes about four-tenths of one percent of global CO2 emissions, so let’s assume the state gets an equal share of the benefit. That comes out to $1.4 billion,” continued Hanley.

A recent peer-reviewed study found that energy transition to wind and solar is more expensive and environmentally nonviable if all costs are considered.

The authors said most previous studies or analyses only focus on the costs of building, fuel, and some of the emissions. But other costs should be considered as well, such as costs of operating, transportation, storage, backup, recycling, and room or space. The authors also calculated three other vital metrics: material input per service unit, equipment lifetime, and energy return on investment.

Viccaro responded that it is “indisputable is that the cost of inaction is more than $100 billion higher than the cost of investing in a clean energy
future in New York State.”

“This is why the efforts by the Climate Action Council are critical now to not only keeping energy costs low but also to increase job opportunities estimated at 200,000 jobs by 2030 and improving the health of New Yorkers,” Viccaro said. “The approach New York State employs to evaluate the value of avoided greenhouse gas emissions is consistent with the established scientific consensus as well as the approach used by the federal government and other states.”

New York Is Not Alone

New York is not the only state heading down the path to a drastic transition to renewable energies.

President Joe Biden has been saying tackling climate change is one of his top priorities. Before he took office, he campaigned on a transition to 100 percent clean energy by 2050. Last December, Biden signed an executive order to make the federal government reach net-zero emissions by 2050.

“Reducing America’s dependence on gas and oil is critical to U.S. national security,” said Deputy Secretary of Defense Kathleen Hicks at the time.