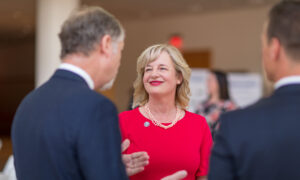 Orange County’s newest Supervisor Katrina Foley was all smiles March 26 as she took the oath of office, representing the second district, during a live-streamed ceremony.

Foley won the board of supervisors seat in March during special election to replace former supervisor Michelle Steel, who was elected to Congress last November.

“What will we be doing in the next 100 days?  We will be vaccinating Orange County,” Foley said during her swearing-in ceremony. “Only if we get our vaccines out can we get back to work and living our best lives.”

She also said her office will be assisting the hospitality industry as it recovers. To that end, she announced a partnership with Project Independence. The Costa Mesa-based non-profit “promotes civil rights for people with developmental disabilities through services which expand independence and choice,” according to its website.

“We need to make plans for the future to protect the environment including working with John Wayne Airport towards cleaner, quieter skies.”