New York’s Democrat Governor Kathy Hochul, who is up for reelection, has raised eyebrows by calling herself an “underdog” in the race.

Hochul became the 57th governor of New York in August last year. In the upcoming November election, she will go against Republican candidate Rep. Lee Zeldin. While speaking to reporters in Queens on Friday, Hochul insisted that she is an “underdog” who has been in the job for a short time, reported NY State of Politics. Given that Hochul is running in New York where Democrats outnumber Republicans, and she has raised close to $50 million in the past year, her statement piqued curiosity.

“I have always fought hard for 14 elections,” Hochul explained. “That is my mental state. I go into every single race fighting because circumstances sometimes you can’t control. You don’t know what’s happening national. There’s a national wave.”

“A lot is out there. There are a lot of forces out there. So I go in with a mindset that I don’t take for granted that they are a Democrat, therefore they are going to vote for me.”

With less than two weeks to go for the midterm elections, Hochul’s lead over Zeldin is narrowing according to a poll by Emerson College Polling-Pix11-The Hill.

Published on Friday, the poll showed Hochul having the support of 50 percent of likely voters in the state, giving her a 6 percent lead over Zeldin who garnered 44 percent support.

In addition, 4 percent of voters still remain undecided. When the poll was conducted in September, Hochul had a 15 percent lead over Zeldin.

A Red Wave in New York?

Hochul is not the only Democrat candidate whose prospects are looking shaky in the November midterms. Rep. Sean Patrick Maloney, who is the chair of the Democratic Congressional Campaign Committee (DCCC), is facing tough competition from Republican Assemblyman Michael Lawler.

A defeat of the DCCC chair would turn out to be a massive win for the Republican Party. On Oct. 24, DCCC confirmed to Spectrum News 1 that they were spending $605,000 on an ad campaign against Maloney’s opponent to “ensure we hold a seat that is critical to Democrats maintaining the majority.”

Meanwhile, Hochul is also losing support from key Democrat members. In an interview with NTD News, Dov Hikind, a Brooklyn Democrat who served as an assemblyman in the New York State Legislature for 35 years until 2018, said that he will be voting for Hochul’s Republican challenger.

In a debate between Hochul and Zeldin, the NY governor failed to address rampant subway crimes and hate crimes targeting the Asian and Jewish communities.

Hikind finds it “crazy” that there is a 40 percent decrease in the number of people using the New York City subway system. “Hochul has no clue,” he said.

Speaking to the New York Post, Rep. Elise Stefanik, chair of the House Republican Conference, predicted a “red wave” sweeping across New York in the upcoming elections. The GOP has “never had stronger candidates” running across the state, she added.

“We could have 15 Republicans in Congress from New York. Polls show we are leading or tied in every competitive seat in New York. Democrats are in free fall due Biden’s disastrous presidency and corrupt Kathy Hochul’s failed leadership,” Stefanik said. 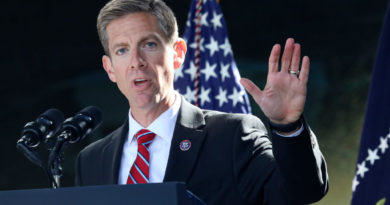