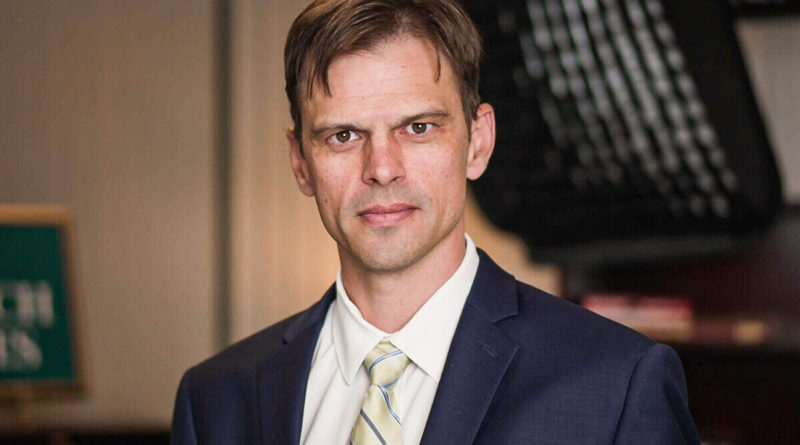 
COVID-19 policies such as lockdowns, masking, and vaccine mandates were not just a method to control the outbreak of an infectious disease but were, in reality, a novel paradigm of governance that utilizes a declared state of emergency, said a former medical ethicist.

These policies laid the groundwork for the rise of the biomedical security state, Dr. Aaron Kheriaty, former director of the medical ethics program at the University of California–Irvine, said in a recent interview on EpochTV’s “Crossroads” program.

Kheriaty, author of the book “The New Abnormal: The Rise of the Biomedical Security State,” clarifies that the concept of the biomedical security state is the welding together of the militarization of public health and digital technologies of surveillance and control, “backed up by the police powers of the state.”

“Public health proved to be a very useful means of getting the population to do what health officials and other people in power wanted them to do,” Kheriaty said.

If this new model of governance is adopted, it will unleash very strong forces at work in the public and private spheres that benefit from it and will push people in the direction of inventing and reinventing new crises to maintain and fuel this biosecurity regime on an ongoing basis, Kheriaty asserted.

For example, an attempt has been made to frame monkeypox as a pathogen that is potentially dangerous to everyone. In fact, monkeypox poses only a risk for a very small percentage of the population engaged in certain types of behaviors, Kheriaty said.

The Biden administration announced in early December that it expects to end the public health emergency on monkeypox, citing a low number of cases.

The monkeypox emergency declaration, introduced first on Aug. 4, 2022, and renewed at the beginning of November, is set to end on Jan. 31.

There are also attempts to redefine other issues as public health issues, Kheriaty said. One example he gave was “an open public letter declaring racism to be a public health emergency,” signed by a group of 1,200 public health officials during the initial COVID-19 lockdown.

Lockdowns were initially implemented to deal with the novel coronavirus, but officials allowed large public gatherings during the George Floyd protests and the Black Lives Matter riots because racism was a deemed a public health crisis, Kheriaty said.

“The second issue that’s been redefined over the last three years from an environmental issue to a public health issue is climate change,” he said.

Climate change used to be framed in terms of ecology, the environment, and the biosphere, Kheriaty said.

The technologies that are currently available but have not been adopted yet on a mass scale—such as digital ID tied to biometric data and central bank digital currencies—can be rolled out when the next public health emergency is declared, Kheriaty said.

People need to get a handle on what was going on with COVID-19 policies, the researcher said.

The digital ID technology that stores a person’s identification data tied to their face, iris scan, and fingerprints in the cloud can provide the ability to assess at any given moment a person’s emotional state with the use of wearable or implantable devices that will collect biometric data under the skin, like heart rate and blood pressure, Kheriaty explained.

The digital ID can also be tied to a person’s credit score and vaccine passport, he added.

The second technology which will be tied into this digital ID are the central bank digital currencies (CBDCs) that were already championed by the Chinese communist regime during the recent Beijing Olympics, Kheriaty said.

China had already rolled out the digital yuan during the Beijing Olympics, not only to its own population but also exporting it internationally by requiring all Olympic attendees from various countries to make all of their purchases and transactions in digital yuan using an app on their phone, the researcher said.

The app allowed the government and some private entities to track the financial information and transactions of every individual participating, access their bank account, and essentially nudge and eventually control individual behavior by controlling how the person spent their money, Kheriaty pointed out.

Although the New York Fed noted that it wouldn’t use the results to form policy or make decisions about establishing a CBDC, the central bank has come under pressure from Washington to keep up with nations that have digitized their currencies, particularly China.

The White House claimed a CBDC “has the potential to offer significant benefits.”

Digital Dollars ‘Not the Same’ as Paper Money

Kheriaty warns that “a digital dollar is not the same thing as $1 bill.” For example, a $1,000 tax rebate in the form of digital dollars given to a person by the government can come with strings attached, such as an expiration date, a requirement to spend the rebate only on green energy, or a prohibition on donating the money to specific nonprofit organizations, he explained.

“These are mechanisms of surveillance and control that Hitler and Stalin could only have dreamed of,” he said.

Americans are not aware that these technologies can be implemented seven or eight years down the road, Kheriaty said.

“These are technologies that are already available. They just haven’t been adopted on a widespread scale,” he said.

“They’ll be pitched to us … on the basis of convenience.” If someone forgets their passport while at an airport, that person could be offered an alternate way of authentication through an iris scan, some kind of background check, or verification of their money spending pattern, Kheriaty said to illustrate his point.

“Then you can get your flight, so it’ll be sold on the basis of convenience and the sort of frictionless ideal of Silicon Valley. But in fact, we’re going to give away much more than we gain if we embrace these new technologies.”

“Undergirding everything that happened during the last three years—all of the pandemic measures that were taken, especially the more authoritarian or invasive measures—was this declared state of emergency in which constitutional rights are temporarily suspended,” he said.

People have observed in the last three years the early results of the constitutional system being eroded, Kheriaty said. Still, they need to understand that this process of erosion is going to continue unless people push back against it.

During the pandemic, people were very focused on national politics and effecting changes through presidential and Senate elections to push back, Kheriaty noted, “but most of the things that impact [their] day-to-day life are happening at the local level.”

While national politics and state-level politics are significant, local politics are extremely important, Kheriaty pointed out, as local officials on the county level, at the city level, the level of a small town, or even on the school board also “wield enormous influence” over people’s lives.

A prerequisite to successfully push back and effect a change in policies is face-to-face communication in different social settings and sharing information, Kheriaty explained. People can get together at their kids’ soccer game, a neighborhood block party, or join a book club where they can read something interesting and talk about it, he added.

Kheriaty considered lockdowns and social distancing attempts of the biosecurity regime to separate people from one another. People were forced to communicate through electronic devices, which allowed Big Tech platforms to intercept and control the flow of information between people, he explained.

“It’s harder for alternative views to be aired when people can’t gather around the water cooler, when people don’t encounter one another face-to-face.”

But people need to act collectively, Kheriaty advised. “If we act individually, we’ll get squashed.” But if people start getting engaged collectively and in small groups and start collectively standing up, it can be very effective at stopping some of those mandates, he pointed out.

“These small groups acting at the local level, these are the real strength of civil society in the United States. And this is what makes the constitutional system in the United States viable and functional,” he said. “When we lose that, even if the Constitution is still there on paper, we’ve changed the way in which our entire society is functioning.”

Andrew Moran contributed to this report.

Ella Kietlinska is a reporter for The Epoch Times focusing on U.S. and world politics.

Joshua Philipp is an award-winning investigative reporter with The Epoch Times and host of EpochTV’s “Crossroads” program. He is a recognized expert on unrestricted warfare, asymmetrical hybrid warfare, subversion, and historical perspectives on today’s issues. His 10-plus years of research and investigations on the Chinese Communist Party, subversion, and related topics give him unique insight into the global threat and political landscape.

Hunter Biden Probe to Look Into ‘What Happened In 2020’: Jim Jordan