High-level Department of Defense officials are mulling whether to make COVID-19 vaccine booster shots part of the mandate for U.S. troops, the Pentagon said Friday.

“There are active discussions here in the department at the policy level about booster shots and whether or not to make those mandatory,” John Kirby, the department’s spokesman, told reporters during a briefing in Virginia.

“There have been no final decisions made about that,” he added.

The Pentagon is forcing every troop, active-duty or reserve, to get a jab unless they receive a religious, medical, or administrative exemption.

The effectiveness of the vaccines, though, drop sharply against infection as time goes on from when they’re administered. The protection against severe disease also drops, though not by as much.

The waning effectiveness has triggered a push by top health authorities to get everybody to get a booster. Early studies indicate boosters restore much of the lost protection, though experts note it’s unclear how long that effect will remain.

Dr. Anthony Fauci, the head of the National Institute of Allergy and Infectious Diseases, said this week that the definition of “fully vaccinated” will be expanded to include boosters.

“It’s going to be a matter of when, not if,” said Fauci, who is one of President Joe Biden’s top advisers.

Kirby said that if the mandate is expanded, military officials will “clearly communicate that and be transparent about it.”

“The numbers keep trending in the right direction, and we’re glad to see that,” Kirby said.

“We know there’s more work to do, and there’s some deadlines that haven’t passed yet, as you well know, as well. But the secretary’s expectation is, because this is a mandatory military readiness requirement, is that everybody’s going to get it with the exception of those, of course, who are properly exempted from it; either doctors’ orders, or they have applied for an exemption that has been accepted,” he said.

Each military branch set different deadlines for troops to get a vaccine. Some deadlines have already come, including ones for active-duty Air Force, Navy, and Marine members.

Troops who don’t get vaccinated and don’t get an exemption are being told they’ll face repercussions, including the possibility of being discharged.

Councilman Ridley-Thomas Has ‘No Intention of Resigning’ Following Indictment 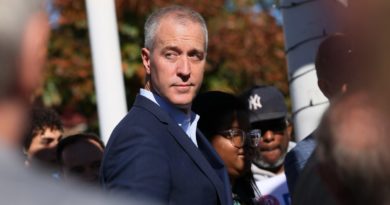