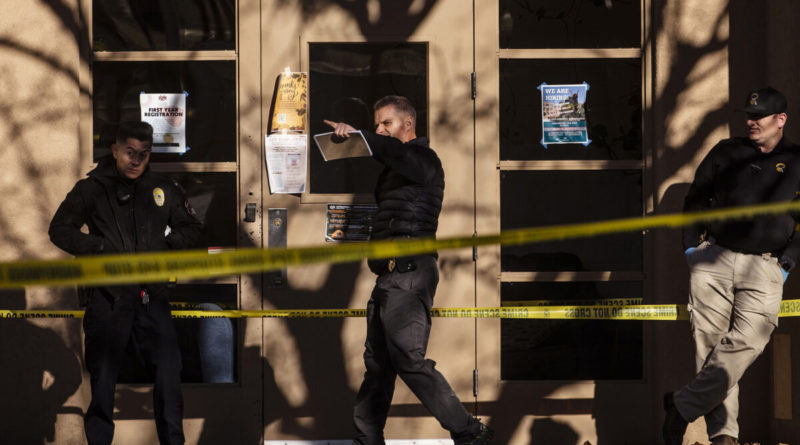 
ALBUQUERQUE, N.M.—New Mexico investigators say a University of New Mexico (UNM) student conspired with two other students and a teenage girl to lure a visiting New Mexico State University basketball player onto campus, leading to a shootout that left the UNM student dead and the player wounded.

The investigation into the shooting early Saturday continued Monday, with New Mexico State Police confirming that they arrested and charged the teen with aggravated battery and conspiracy. It was too early to say whether others would face charges.

Police identified Brandon Travis as the University of New Mexico student who was fatally shot and accused of planning the assault on Mike Peake, the starting power forward for the Aggies basketball team. Police have identified the other two students, but their names have not been released.

The shooting in Albuquerque happened hours before the scheduled tipoff of a basketball game between the rival schools, which was later postponed. It was not clear if the game would be rescheduled or if a Dec. 3 matchup in Las Cruces would go on as scheduled.

New Mexico State Police said an altercation between Travis, 19, and Peake led to the shooting. They said Travis had plotted with his friends “to lure the 21-year-old victim to UNM campus and assault him.” How and why they initially crossed paths remained unclear.

“Once at the campus, Travis, armed with a firearm, confronted and shot the victim. The victim, who also had a firearm, shot Travis,” authorities said in a statement issued Sunday.

The teen girl and Travis’ friends fled the scene outside a dormitory at UNM’s Albuquerque campus.

Peake was listed in stable condition at a hospital.

New Mexico State University officials confirmed Monday that the player was Peake, a Chicago native who spent most of high school playing in Kansas before signing with Georgia and then transferring to Austin Peay State University. He came to NMSU for the 2021–2022 season.

New Mexico State University Chancellor Dan E. Arvizu said in a statement it was important that “no one rush to judgment until all the facts are made available.”

The shooting came six days after a former University of Virginia football player allegedly killed three Cavaliers football players and wounded two other students on the Charlottesville campus before being arrested.

New Mexico State University officials said no students are allowed to have any weapons on university property or at university sponsored activities, and that doing so is a violation of the student code of conduct. They noted that players’ bags will be searched in the future when they board the bus for road trips.

After dinner, the team had returned to the hotel and watched video footage from 10:30 to 11:30 p.m. to prepare for the game. Bed checks were done at 11:45 p.m., and officials said all student athletes were in their rooms at that time. An assistant coach was present in the hotel lobby from midnight until 2 a.m., they said.