On Wednesday evening, Russian President Vladimir Putin ordered his troops to begin an invasion of Ukraine. The invasion and the tensions leading up to it have put on full display divisions between the old guard of the Republican Party, who have called for a major U.S. response, and the new populist wing of the party, who have called for the United States to stay out of the conflict.

Prior to President Donald Trump’s 2016 campaign, Republicans were largely in favor of the United States’ role as an international peace-keeping force.

Republicans largely supported several conflicts begun after the collapse of the Soviet Union, including the military action to repel Iraqi forces from Kuwait in 1991, the larger-scale invasion of Iraq in 2003 that ended in the execution of Saddam Hussein, and the Afghanistan War.

In 2016, Trump sparked a new brand of right-wing populism that, in contrast to the GOP of the past, took toward a far more cautious attitude toward foreign conflict.

During a Republican primary debate, Trump called President George W. Bush’s Iraq War “a tremendous disservice to humanity,” saying that all it achieved was to leave the Middle East “a total and complete mess.”

After he was elected, Trump did order scattered military actions but did not start any new wars. He also used his platform to challenge the North Atlantic Treaty Alliance (NATO), a remnant of the Cold War that has continued to receive massive amounts of U.S. funding long after the fall of the Warsaw Pact.

Longtime members of the GOP made clear that they opposed this attitude toward foreign policy, which they said would undermine U.S. allies’ faith in the nation among other criticisms.

In the weeks leading up to and following the invasion of Ukraine, many in the GOP old guard have called for debilitating sanctions on Russia, supplies and monetary assistance to Ukraine, and U.S. boots on the ground—one lawmaker, Senate Armed Services Committee Ranking Member Roger Wicker (R-Miss.), even suggested that the United States shouldn’t rule out a nuclear first strike against Russia.

Senate Minority Leader Mitch McConnell (R-Ky.), who voted in favor of the Iraq War and has maintained a strongly interventionist attitude toward foreign relations, called for massive sanctions on Russia, echoing the sentiments of many senators on both sides of the aisle.

Rep. Mike Turner (R-Ohio), who served as President of the NATO Parliamentary Assembly from 2014–2016, opined that the United States should send taxpayer funds to the Eastern European country.

“I believe that the administration should be actively arming Ukraine so it can defend itself,” Turner said. “They want to defend themselves. They should be given every opportunity to do so.”

Since 2014, when Russia moved forces into the Crimean peninsula after citizens in the region voted overwhelmingly to join Russia, Washington has sent more than $2 billion in military assistance to Ukraine. In December, Congress sent $300 million to Ukraine, with $75 million designated particularly for purchasing weapons.

Sen. Rob Portman (R-Ohio), co-chair of the Senate Ukraine Caucus, seemed to indicate that he is in favor of sending ground troops to the region in coordination with other European allies.

The United States should “ensure a coordinated response to this unwarranted continued incursion on sovereign territory of Ukraine,” Portman said.

Another side of the Republican Party, generally younger, newer faces on the political scene, have called for the United States to stay out of the conflict.

J.D. Vance—whose 2016 memoir “Hillybilly Elegy” is often considered a defining piece of literature in understanding the new American populism—is running to replace Portman, who has announced his retirement. In an interview, Vance gave a significantly different answer on how the United States should respond to the Russian invasion.

“I gotta be honest with you, I don’t really care what happens to Ukraine one way or another,” said Vance. “I’m sick of Joe Biden focusing on the border of a country I don’t care about while he lets the border of his own country become a total war zone.”

Candace Owens, a black conservative woman who has been pegged as a potential candidate for public office in the future, went a step further than Vance, blaming the crisis on the United States and NATO.

“I suggest every American who wants to know what’s actually going on in Russia and Ukraine, read this transcript of Putin’s address. As I’ve said for month—NATO (under direction from the United States) is violating previous agreements and expanding eastward. WE are at fault,” Owens said in a Tuesday tweet.

In a separate tweet, she added, “If you think America has never been the aggressor in war—you are not ‘pro-American’ you are pro-ignorance.”

Prior to the conflict, Putin often contended that war could be avoided by a U.S. promise not to pressure Ukraine into joining NATO.

A NATO-allied Ukraine, in Putin’s view, would pose a serious risk to Russian national security by potentially allowing the United States and other NATO members to set up nuclear missile sites that could reach Moscow in minutes.

Western leaders have refused the demands, contending that Russia should not be allowed to dictate who joins the Cold War-era alliance organization.

Tucker Carlson, who has in recent years become a prime spokesman of the new populism, has expressed similar sentiments, demanding that leaders de-escalate the situation and keep the United States out of the conflict

During a late January segment of his show Tucker Carlson Tonight, Carlson suggested, like Owens, that NATO’s insistence on potential Ukrainian membership is to blame for the rising tensions.

“A bipartisan coalition of neocons in Washington has been recklessly stoking conflict between [Russia and Ukraine] for years now,” Carlson said.

Lawmakers like Sen. Josh Hawley (R-Mo.) and Rep. Matt Gaetz (R-Fla.) have not gone quite as far in their opposition to U.S. intervention, but they have called for de-escalation and said that any U.S. military activity should be preceded by a formal declaration of war.

Though the president is required by the Constitution to receive a congressional declaration of war, Congress has not formally declared war since World War 2. Rather, it has passed less formal use-of-force authorizations, happily abdicating its authority over foreign policy, leaving it to the executive to make the tough calls—and take the blame when things go awry.

The divisions in the party over the proper response to Russia’s invasion of Ukraine indicates a substantial shift in GOP attitudes toward foreign policy.

Before Trump, a few isolated Republican voices—notably libertarians like former Rep. Ron Paul (R-Texas), his son Sen. Rand Paul (R-Ky.), and Reps. Thomas Massie (R-Ky.) and Justin Amash (I-Mich.), among others—decried the United States’ post-Cold War foreign policy, but the sentiment was not an especially common one among GOP politicians and commentators.

Now, the influence of Trump-like foreign policy on the right is growing, though many lawmakers on both sides of the aisle remain staunchly in favor of intervention in the Ukraine conflict and beyond.

Joseph Lord is a Congressional reporter for The Epoch Times who focuses on the Democrats. He got his Bachelor of Arts in Philosophy from Clemson University and was a scholar in the Lyceum Program. 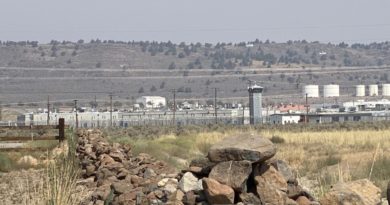 California to Close 2 Prisons and Deactivate 6 Other Facilities