SAN FRANCISCO—The Tenderloin Linkage Center has dropped the word “linkage” from its name after very few people were linked to drug recovery services and other programs.

The center opened in January and was scheduled to remain open until at least June 30. While it’s been approved by the County Board of Supervisors for another six months, the center is reportedly operating more like a safe drug consumption site.

During a May 27 virtual press conference opposing Senate Bill 57, Michael Shellenberger, author of the book “San Fransicko,” said the Tenderloin Linkage Center was designed to keep the open drug scene contained in one area, but instead, it has spread across two neighborhoods: Tenderloin and South of Market.

“The whole program is contrary to how they do it in Europe. In Europe they pressure addicts engaged in dysfunctional, inappropriate behavior. They do not normalize drug consumption in those European cities. San Francisco is normalizing hard drug use, open-air drug dealing, and public camping as somehow normal behaviors that should be expected from people using hard drugs,” said Shellenberger.

According to reports released by the Tenderloin Emergency Initiative, linkage center visits quickly reached the thousands per week. While, the total number of visits increased on average over time, there were fewer completed linkages with a low success rate.

A completed linkage is when the person seeking help is referred, signs paperwork, and is transported to the next location to receive help. 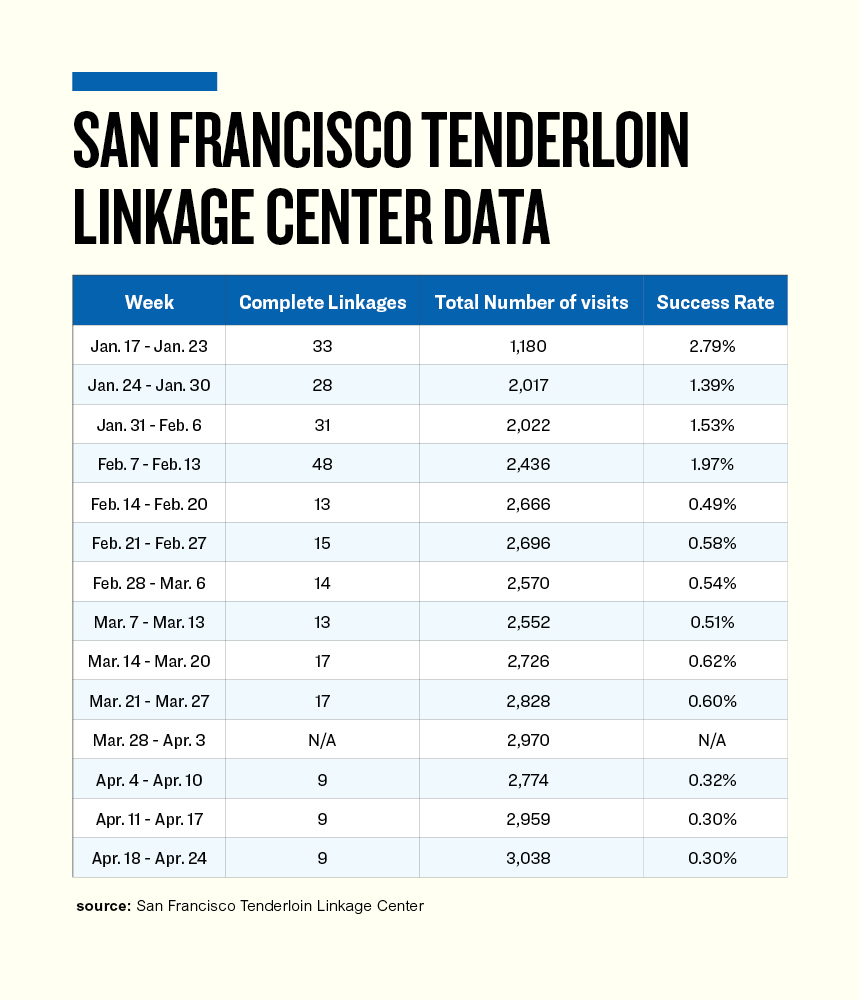 In an email statement to The Epoch Times in February, the San Francisco Department of Public Health said the linkage center is meant to be a safe place where people can get meals, showers, other basic needs and human service resources.

“The expectation is not that all guests are seeking linkages or that all visits to the TLC end in a linkage,” the email reads. “However, providing rapid and accessible linkages to care and services remains a priority.”

Shellenberger was not the only one opposing the use of such facilities for safe drug consumption.

Senator Scott Wiener introduced the bill, and the California Senate passed it last April. The intention was to create drug consumption locations that would have medical staff on site to avoid overdoses. The sites would be established in San Francisco, Oakland, and Los Angeles County.

But opponents say the injection sites only make drug use easier and also encourages people to use drugs even if they are not at the site. They warn that it would pave the way to legalizing all drugs.

Shellenberger said that data shows there are more drug deaths in areas where an injection site is opened.

“The reason so much attention is being drawn to it recently is because the deaths come from well-to-do families,” said Assemblyman Jim Cooper (D-Elk Grove).

San Francisco’s Office of the Chief Medical Examiner reported 192 accidental overdoses (pdf) between January 2022 through April 2022. Fentanyl was the number one cause of overdose, followed by methamphetamine, cocaine, medicinal opioids, and finally heroin. The location of deaths were mostly in the Tenderloin and South of Market neighborhoods.

Those opposed to SB 57 also said safe drug consumption sites bring down the quality of life.

According to Syderia Asberry-Chresfield, co-founder of Greater Harlem Coalition in New York, there is a site just blocks from her home, but people still use drugs right on her stoop.

“I’ve gone out to say, look, there’s a safe injection site literally five blocks away. Why don’t you just go there and use that site? And they don’t want to go that far. They said why? And I get it. Because when they have drugs in their hands they’re going to use it,” said Asberry-Chresfield.

“Moreover, the injection sites always become a magnet for drug dealers, drug addicts, robbers, and the like, hurting the nearby communities seriously,” said Frank Lee, president of Organization for Justice and Equality.

“Not only are you saying that it’s legal to take drugs, but it’s also legal to sell drugs?” said Asberry-Chresfield. “I mean, what kind of road are we going down at this point?”

A hearing for SB 57 is scheduled for June 1.

Cynthia Cai contributed to this report.

Ilene is a reporter based in the San Francisco Bay Area covering Northern California news.

Federal Agency Announces MANDATORY Vaccines for All Employees Under Title 38