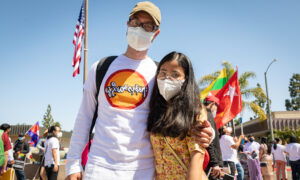 A pair of newlyweds based in Southern California who were trapped for weeks in Burma (also known as Myanmar) following the recent military coup say they documented violent attacks against unarmed protesters as they waited to escape the country.

Michael Ghilezan and his wife, Nant, had only been married for 10 days when the military overthrew the democratically elected National League for Democracy (NLD) government on Feb. 1. The couple were waiting to arrange a green card for Nant so she could return to the United States when the coup struck.

Ghilezan, a 36-year-old lawyer and human rights activist based in Los Angeles, said his family became concerned because of his previous activities denouncing the Burmese military, so they contacted U.S. officials to expedite his wife’s visa. The U.S. State Department approved the visa in two weeks—but during that span, the situation in Burma deteriorated, resulting in violent confrontations between the military and unarmed protesters.

“We witnessed the arbitrary arrest of a neighbor one street away from us, who was later killed in military custody. He was the first NLD member to be murdered by the junta,” Ghilezan told The Epoch Times.

He identified the victim as 58-year-old Khin Maung Latt, a ward chairman from Pabedan, a township in Yangon. March 6 would be the last day his family would see him alive.

Ghilezan said he photographed the event from a vantage point atop a high building, and identified the perpetrators who arrested Latt as members of the military junta’s 77th Light Infantry Division by the shoulder insignias on their uniforms.

The next day, he said, Burmese authorities told Latt’s family to retrieve his corpse from a military hospital in Mingaladon, a section of Yangon. Ghilezan said there were deep wounds on the victim’s body, and alleges Latt was tortured while in the military’s custody.

While the couple waited to return to California, Ghilezan documented confrontations between protesters and the military. Eventually, he passed along video and photographic evidence to agencies outside of Burma, including Human Rights Watch, a nonprofit based in New York.

He described being caught in the middle of military crowd-control efforts on Feb. 27 in Sanchaung, a township in north Yangon, while documenting a peace march of about 1,000 people organized by the General Strike Committee of Nationalities (GSCN).

“We were not even protesting, just gathering on a side street. The police force was stationed near a park, and we were on the other side of the park,” Ghilezan said. “With no forewarning, a group of about 40 to 60 cops in anti-riot gear started running towards my location.

“The protest started marching away from the police. No matter. The police started shooting rubber bullets and charged towards the group. … For the rest of the day, protesters would gather and start chanting. Then the police would charge at them, beating the ones they could catch, and arrest them.”

He added, “This was the last attempt to have a march that I witnessed in Yangon.”

Others who tried to document the violence have not been so lucky. On March 11, 30-year-old Polish journalist Robert Bociaga was apprehended by Burmese security forces while covering the coup; he was held in detention for 13 days before being released and deported on March 24. On the same day, Associated Press reporter Thein Zaw was released from detention after being held for more than three weeks by the military.

Ghilezan also said he has personally seen evidence that shows the military killing a nonviolent protester. “There is an actual video of the shooting, which shows that she was not doing anything aggressive against the police and was far away from the police line, yet … she was shot in the head,” he said.

Despite the risk, citizens continue to protest throughout the country, Ghilezan said.

“Even in the face of live bullets, arbitrary arrests, torture while incarcerated, and threats to their families, the youth are still going out in the streets to protest,” Ghilezan said. “We have spoken with hundreds of youths, and they all keep saying that they will not stop, no matter what level of violence the military unleashes on them.”

The use of lethal force by the military junta against peaceful protesters has been condemned internationally by the United States, Great Britain, members of the European Union, and United Nations Secretary-General António Guterres. However, both Russia and China continue to support the military.

After clearing COVID-19 testing, Michael and Nant were able to book a flight from Yangon to Singapore on March 10, and eventually secured a final flight into Los Angeles.

“Our plan is to continue to support the revolution by speaking out about what is really happening in Burma, and to counter the junta’s desperate attempts to whitewash their crimes through the use of lobbyists,” said Ghilizan.

After hearing their story, a friend looked over at Nant and called her “a hero” for the risk she and her husband took while documenting Burma’s turmoil.

“I am not a hero,” Nant said tearfully. “The heroes are in the streets right now, and they are demonstrating for our democracy and freedom in Burma.”

Nearly Half of Democrats Would Back Temporary Detention for Unvaccinated: Poll