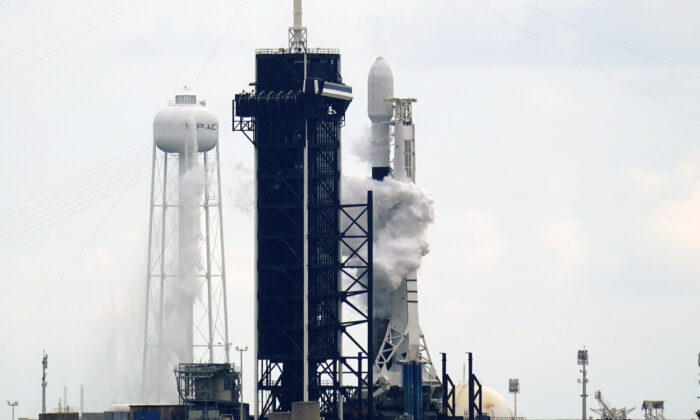 A SpaceX Falcon 9 rocket with a payload of approximately 60 satellites for SpaceX’s Starlink broadband network stands pad 39A moments before the launch was scrubbed due to weather concerns at the Kennedy Space Center in Cape Canaveral, Fla., on Sept. 28, 2020. (John Raoux/AP Photo)

SpaceX launched 53 Starlink satellites into orbit from Florida on Saturday.

A Falcon 9 rocket lifted off from Cape Canaveral Space Force Station at 7:19 a.m. EST (1219 GMT) and deployed the satellites about 16 minutes after launch.

The rocket’s reusable first stage, which has been used for multiple launches, successfully returned and landed on the “Just Read the Instructions” droneship in the Atlantic Ocean.

Starlink is a satellite-based global internet system that SpaceX has been building for years.

Companies Grapple With Law on Vaccination Incentives for Workers

Texas Shooter May Have Been ‘Inspired’ by Terrorists