Senator Ted Cruz (R-Texas) said the GOP would retake the U.S. Senate and House majority during the November midterm elections.

“I think we are going to see a wave election,” Cruz told Fox News on Oct. 6. “I think it’s going to be a tsunami.”

Cruz, who was in Arizona as part of a multi-state campaign bus tour, pointed to the Republican’s advantage with record-high inflation and gas prices.

“People are energized,” Cruz said. “They are [expletive] at the idiots in Washington at the direction of the country. They are mad at inflation. They are mad at gas prices. They are mad at crime and chaos at our southern border and furious at the cultural Marxists trying to destroy our country. That’s why I think it’s going to be a fundamental wave election this year.”

Democrats’ Only Talking Points Is Abortion

As for the Democrats’ campaign on abortion after Supreme Court’s decision to overturn Roe v. Wade in July, the lawmaker said there was no other issue the party could focus on.

“You certainly couldn’t talk about illegal immigration,” he continued. “If you try to talk foreign policy, Biden’s surrender to the Taliban is a loser,”

“So they’re left with abortion, and they’re trying to make it all about abortion. And the crazy thing about it is, the Supreme Court has returned that issue to the voters. So now, every state will decide the abortion laws in their states. The laws will reflect the values of their citizens. It’s democracy.”

Cruz suggested the multiple issues plaguing the Biden administration would make November’s midterm like the election in 2010 when the GOP won 63 Houses seats and gained control of the chamber.

“It is a fundamental change election, and I couldn’t be more excited about it,” he said.

Master, a tech entrepreneur endorsed by former president Donald Trump, is facing a hot race against Democratic incumbent Sen. Mark Kelly. The Senate race was considered one of the five keys determining the control of Washington.

Cruz has repeatedly expressed his confidence that the GOP will flip enough seats to regain control of both chambers.

“We are heading towards not just a red wave but a tsunami in November,” Cruze said in a June interview on The Dan O’Donnell Show. 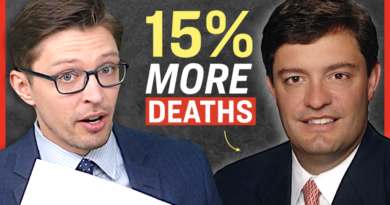 The Funeral Business Is Booming (and Not Because of COVID): Excess Death Numbers in 2022