The Texas Supreme Court ruled on March 11 that state officials do not have the authority to enforce the state’s six-week abortion ban, which effectively ends the abortion clinics’ federal legal challenge to the law.

The Texas Heartbeat Act, also known as Senate Bill 8 (SB 8), bans abortions after a heartbeat is detected—usually around six weeks after conception—unless a medical emergency exists. It has no exception for pregnancies due to incest or rape.

The law has a unique enforcement mechanism such that state officials have no role in enforcing it, but private citizens can file lawsuits against anyone who allegedly “aids and abets” in an abortion that violates the law. The exception is for individuals who caused the pregnancy through incest or rape, who cannot file such lawsuits. Because no state officials are involved in enforcing the law, abortion providers have found it difficult to bring legal challenges against particular individuals.

Texas’s high court has nine justices, all of whom are Republicans. It ruled on March 11 that state medical licensing officials have no authority to enforce the law.

“The Court concluded that Texas law does not authorize the state-agency executives to enforce the Act’s requirements, either directly or indirectly,” they wrote (pdf). The ruling means the abortion providers cannot sue the state officials to challenge Texas’s abortion ban, effectively ending the legal challenge.

“This measure, which has saved thousands of unborn babies, remains fully in effect, and the pro-abortion plaintiffs’ lawsuit against the state is essentially finished,” he said on Twitter. “TEXAS IS PRO-LIFE!”

Pro-life group Texas Right to Life called the decision a “big victory” for the state.

“We have said from the beginning that abortionists’ lawsuit should be dismissed, and we’re grateful that the law will continue saving thousands of lives,” Kimberlyn Schwartz, the organization’s media director, said in a statement.

Nancy Northup, CEO of the Center for Reproductive Rights, an organization representing the abortion providers in the case, said in a statement: “With this ruling, the sliver of this case that we were left with is gone.”

She said the six-week abortion ban is “unconstitutional” and “continues unchecked in the state of Texas,” adding, “The courts have allowed Texas to nullify a constitutional right.”

The Texas Supreme Court’s ruling is a matter of judicial procedure and did not focus on whether the abortion ban is constitutional.

When the abortion ban went into effect on Sept. 1, 2021, the U.S. Supreme Court denied an effort to block the measure in a 5–4 ruling on the same day.

Whole Woman’s Health, which operates four Texas abortion clinics as well as other clinics in five other states, had sued to overturn the law. Whole Woman’s Health also challenged the unique enforcement mechanism of the Texas law.

The Supreme Court heard oral arguments in the case on Nov. 1, 2021. The court refused to stay the law and threw out most of the arguments against the law, but allowed the narrow challenge to continue against certain state licensing officials, ruling that they might have indirect authority to enforce S.B. 8.

Supreme Court Justice Neil Gorsuch on Dec. 16, 2021, sent the challenge back to the U.S. Court of Appeals for the 5th Circuit, which sent the case to the Texas Supreme Court, at the request of Texas officials, who argued they were immune to the lawsuit since the law doesn’t give them authority to enforce it. In a 2–1 vote, the 5th Circuit court panel asked the Texas Supreme Court to interpret S.B. 8 and determine whether the state officials are appropriate defendants under state law.

The Texas court wrote on March 11: “Senate Bill 8 provides that its requirements may be enforced by a private civil action, that no state official may bring or participate as a party in any such action, that such an action is the exclusive means to enforce the requirements, and that these restrictions apply notwithstanding any other law.”

“We have been fighting back against this ban for six long months, but the courts have failed us,” Whole Woman’s Health said in a statement. The group said that neighboring states are “about to pass similar bans” making it harder for people in Texas to get “abortion care.” It said that S.B. 8 is “unsustainable and cruel” and that people in Texas “deserve access to abortion care.” 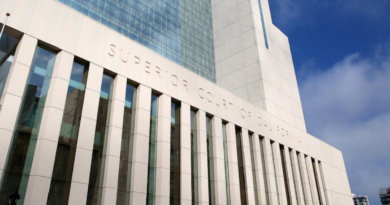 Woman Sentenced to 30 Years to Life for South Bay Murder