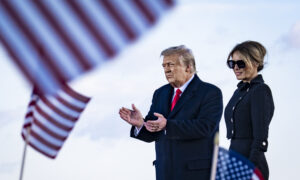 Former President Donald Trump pulled four potential candidates for the Ohio U.S. Senate seat into a face-to-face meeting during a fundraiser at his gold club in West Palm Beach, Florida, on Wednesday, according to two sources close to the people in the room.

The former president headlined a fundraiser that day for former Trump White House official Max Miller, who is running for the U.S. House of Representatives as a primary challenger to Rep. Anthony Gonzales (R-Ohio), one of the ten Republicans who voted to impeach Trump.

Before the dinner and his planned appearance on stage, Trump summoned the four contenders for the U.S. Senate seat being vacated by Sen. Portman (R-Ohio) to a meeting in a private room. Two of the meeting attendees, former Ohio Treasurer Josh Mandel and former Ohio GOP Chair Jane Timken, have formally announced their candidacies. The two others, investment banker Mike Gibbons and tech company executive Bernie Moreno, have yet to formally enter the fray.

Politico was the first to report on the meeting. The Epoch Times verified the details with two people close to the attendees.

Trump opened up the discussion by asking the group how the race is going. The four candidates then took turns to make their cases. All for dropped references to their support of the former president, apparently angling for a Trump endorsement, which has become the most coveted credential for Republicans in primary elections.

Gibbons mentioned that he has given six-figure donations to Trump’s campaign through the Republican National Committee in 2016 and 2020. Moreno said his daughter worked for Trump’s 2020 campaign. Mandel positioned himself as the fighter and touted internal polling showing him well ahead of Timken. Timken brushed the comments aside and argued that her own polling tells a different story.

“It was Josh and Jane trying to one-up themselves on who was a better candidate and better Trump fan. Mike and Moreno made their cases in a more diplomatic way than the other two probably did,” a person close to one of the attendees told The Epoch Times.

In official campaign statements, Timken and Mandel said they are running to fight for Trump’s agenda in Washington. Timken describes herself as a “pro-Trump conservative.” Mandel has said he is “going to Washington to fight for President Trump’s America First Agenda and to pulverize the Uniparty.”

The meeting lasted roughly 15 minutes. Both during the meeting and later during his speech on stage, Trump said he liked all four of the candidates.

“They all took the time to fly there and I think he was being very gracious with his time to allow them all to come in and talk about the Ohio Senate race in a state that he’s done well in both times,” one of the sources said about the meeting.

A fifth candidate, J.D. Vance, is all but certain to enter the race, according to a person close to the potential campaign. Tech billionaire Peter Thiel donated $10 million to a political action committee (PAC) that would back Vance if he ran, according to Bryan Lanza, the communications director for the PAC.

COVID-19: AstraZeneca requests emergency authoritisation in US or drug that reduces risk of developing coronavirus symptoms by 77% | UK News