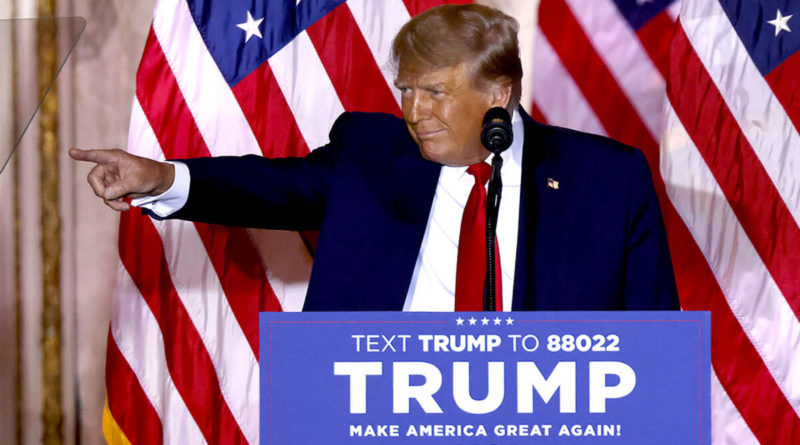 
Former President Donald Trump’s announcement of his candidacy for the Republican nomination for the nation’s highest office is drawing predictable bashing from Democrats, along with some unexpectedly reserved commentary from GOP figures.

“I know you may be focused on Donald Trump tonight, but first we gotta focus on Georgia. Please chip in to help me defeat my opponent, @HerschelWalker,” Warnock said in the tweet that featured a photo of Trump and Walker shaking hands when both were much younger.

Sen. Brian Schatz (D-Hawaii) boosted Warnock and attacked Trump in a tweet, declaring “the main thing you need to know about Trump announcing for reelection is that Raphael Warnock is in a runoff and it’s exactly 3 weeks from now and we don’t just need money we need it kinda fast,” said Sen. Chris Murphy (D-Conn.) in a retweet of  the Schatz comment.

Democratic National Committee Chairman Jaime Harrison was even more blunt in response to Trump’s declaration, saying the former president “was a failure as president; that’s why he lost in 2020 and it’s why he will lose again. Democrats stand ready to remind Americans what Trump brought America: the worst jobs record since the Great Depression, rigged the economy for the super rich with massive tax giveaways to corporations, the right-wing Supreme Court that overturned Roe and paved the way for extreme Republicans across the country to criminalize abortion, a diminished standing across the world, and absolute chaos that culminated in inciting a mob to attack the Capitol to try to overturn an election he knew he lost.”

Harrison added a prediction that the 2024 GOP presidential primary will be a “messy” affair featuring “candidates competing to be the most extreme MAGA Republican in the race. The DNC will be ready for them all.”

And President Joe Biden—energized by his unexpected success in predicting that Democrats would do surprisingly well in the Nov. 8 election—released a tweet prior to his former rival’s event that included a voiced-over video comparing Trump’s “talking” with “Biden’s “delivering.”

On the Republican side—still reeling from the shock of the predicted “Red Wave” that never materialized—Trump’s announcement drew a surprisingly restrained response. Sen. Lindsey Graham (R-S.C.) posted a tweet with a cautious assessment that stopped short of being an endorsement.

“If President Trump continues this tone and delivers this message on a consistent basis, he will be hard to beat. His speech tonight, contrasting his policies and results against the Biden Administration, charts a winning path for him in the primaries and general election,” Graham said.

Mick Mulvaney, Trump’s former Chief of Staff who soured on him after departing the White House, told CNN “he’s the only Republican who could lose. If he wins in 2024, now he’s the candidate, he is the likely Republican nominee. Can he be beaten head-to-head by Ron DeSantis or Tim Scott? Sure.

“But it’s not going to be a head-to-head race. There will be five or six other people in the race and he’ll get the 35 percent that really support him and under the winner-take-all primary system, he’ll be the nominee.”

Republican governors were meeting in Orlando, 125 miles from Trump’s Mar-a-Lago estate during the announcement. New Hampshire Gov. Chris Sununu told the Washington Post in unusually harsh terms that the former president’s personality traits would defeat him in 2024.

“He’s doing it from a place of defensiveness, of his own self-opportunity and weakness. So he’s announcing he’s going to run for president at a low point in his political career. I don’t know how that’s going to work out, man,” Sununu said.

Trump did draw fervent support from long-time congressional backers like Rep. Ronny Jackson, the Texas Republican and former White House physician, who posted in a tweet that Trump “has my complete and total endorsement.”

Another Texas Republican House member declared for Trump in a tweet. “My friend Donald J. Trump has my complete and total endorsement for president in 2024. He is the leader of the Republican Party, and we will make America great again,” said Rep. Troy Nehls.

And two days before Trump’s announcement, Rep. Elise Stefanik (R-N.Y.) raised eyebrows with a statement, saying “I am proud to endorse Donald J. Trump for President in 2024. It is time for Republicans to unite around the most popular Republican in America, who has a proven track record of conservative governance.”