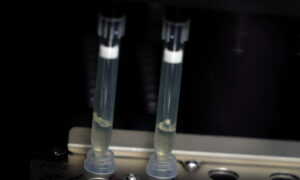 CHICAGO—U.S. health officials are working to expand capabilities to test for monkeypox beyond a narrow group of public health labs, heeding calls from infectious disease experts who say testing for the virus needs to become part of routine care.

Centers for Disease Control and Prevention (CDC) Director Dr. Rochelle Walensky said during a conference call on Friday that her agency is working with the Food and Drug Administration (FDA) and Centers for Medicare and Medicaid Services (CMS) to expand testing capacity to include commercial laboratories.

The CDC did not respond to a request for further details.

Currently, preliminary monkeypox testing in the United States is done through a network of 69 public health laboratories, which send results to the CDC for confirmation.

There have been at least 45 confirmed monkeypox cases in 16 U.S. states so far, with the bulk of the current outbreak outside of Africa, where the virus is endemic, occurring in Europe.

“There is not enough testing going on now for monkeypox in the United States,” said Dr. Tom Inglesby, director of the Johns Hopkins Center for Health Security.

“The commercial labs are used to working with healthcare providers from across the country, moving samples around quickly, reporting results quickly in a way that providers understand and expect,” he said.

For commercial labs to do this testing, they need access to monkeypox samples to validate their tests, regulatory guidance from the FDA, and commercial billing codes set by CMS, said Inglesby, a former senior White House adviser for the COVID-19 response.

“My sense is all of that is moving forward,” he said.

In a detailed report of 17 cases published by the CDC last week, most patients identified as men who have sex with men.

In many of the cases, the monkeypox rash started in the genital area, which could lead some doctors to misdiagnose it as a more common sexually transmitted infection such as herpes or syphilis.

The Association of Public Health Laboratories said it has plenty of capacity now, but would work to expand testing to commercial labs should the outbreak continue to grow.