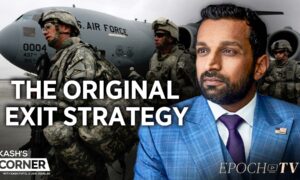 Kash’s Corner: We Knew This Would Happen in Afghanistan, and We Had a Strategy to Prevent It

“It’s not like we deleted all that intelligence when we transitioned,” says Kash Patel, who previously served as Chief of Staff to then-Acting Secretary of Defense Christopher Miller.

“Our assessment was that if we surrendered in Afghanistan—that is, if we just up and left—the Taliban would take over almost immediately,” Patel says.

In the premiere of Season 2 of Kash’s Corner, Patel unveils, in detail, the original conditions-based withdrawal strategy that he was tasked with implementing.