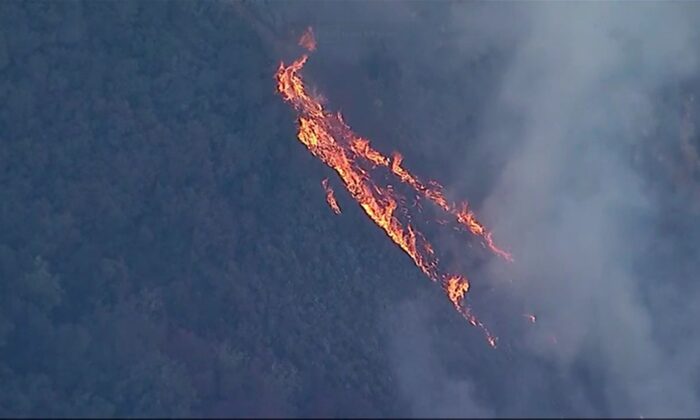 In this video still, Wildfire burning in Southern California forest, in Calif., on Mar 3, 2022. (KABC via AP/Screenshot via The Epoch Times)

Firefighters on the ground and in the air battled a smoky wildfire on Wednesday in Southern California’s Cleveland National Forest.

The fire was reported around 11:20 a.m. Pacific Time (19:20GMT) in the Holy Jim Trail area and nightfall it had consumed about 500 acres (202 hectares) of brush along steep slopes.

About 100 firefighters were dispatched, with air tankers and helicopters dropping water and retardant on the blaze, dubbed the Jim Fire.

No structures were threatened.

The fire sent up a huge plume of smoke visible across Orange County, southeast of Los Angeles, and beyond. It erupted on the last day of a winter heat wave, with temperatures in the 80s (about 29 Celsius) and very dry humidity levels.

Rain and cooler temperatures were expected on Thursday.

The fire’s cause was under investigation.

Texas Border Crossing Where Migrants Made Camp to Reopen