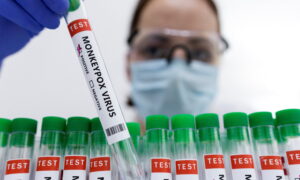 The UK health authorities have detected 71 additional cases of monkeypox in England, taking the total number of cases in the UK to 179.

According to the latest figures from the UK Health Security Agency (UKHSA), as of May 29, the total number of confirmed cases in England was 172.

There are currently four confirmed cases in Scotland, two in Northern Ireland, and one in Wales, taking the UK total to 179.

UKHSA said that the majority of the cases identified to date have been “among men who are gay, bisexual, and men who have sex with men.”

The agency said that the risk to the UK population “remains low,” but urged people to be alert to any new rashes or lesions on any part of their body.

Dr. Ruth Milton, senior medical advisor at UKHSA, said: “We are continuing to work closely with our colleagues in Scotland, Wales, and Northern Ireland to ensure we are aligned in our approach to reducing the risk of transmission of monkeypox in the UK.”

She urged anyone who finds new spots, ulcers, or blisters on any part of their body, “particularly if they have recently had a new sexual partner,” to contact the health service as soon as possible to help “limit the virus being passed on.”

On May 30, UKHSA published new guidance agreed across all four UK nations on how to limit the transmission of monkeypox.

The new advice urges those with monkeypox to avoid close contact with others until their lesions have healed and any scabs have dried off.

People who have had contact with someone with the disease should also be risk assessed and may be told to isolate for 21 days if necessary.

The guidance said people with suspected or confirmed monkeypox who need to travel in order to seek care should make sure any lesions are covered by clothing, wear a face covering, and avoid public transport where possible.

They should also abstain from sex from the first signs of symptoms and make sure to use condoms for eight weeks after infection.

The disease, first found in monkeys, can be transmitted from person to person through close physical contact, including sexual intercourse, and is caused by the monkeypox virus.

The virus is usually found in west and central Africa.

Symptoms are generally mild and the illness is spread through close contact with someone already infected.

Most people recover within a few weeks.

How Has Australian Life Changed Over the Last 20 Years?