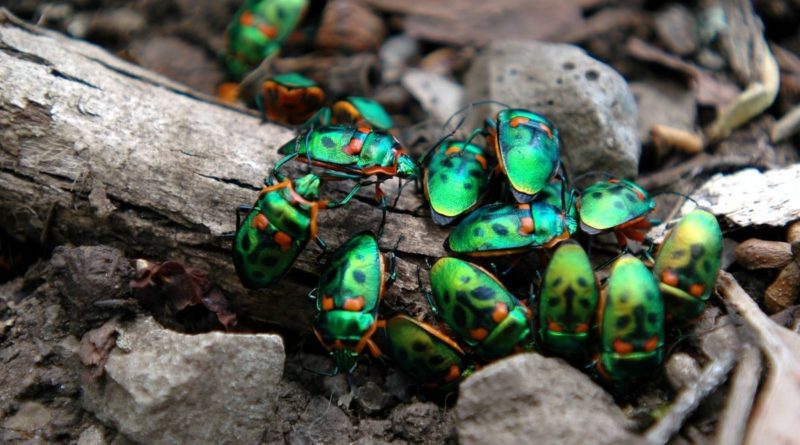 
Researchers from the University of Sydney suspect that the iconic Australian Christmas beetle is in decline and are imploring Aussies to assist scientists in a country-wide beetle population count.

In an email to The Epoch Times, Assoc. Prof. Tanya Latty, from Sydney University, said that it’s not known for sure that Christmas beetles have declined, as long-term population data isn’t possessed.

But, Latty said that most Australians over the age of 30 seem to have strong memories of huge numbers of Christmas beetles arriving around Christmas each year, and that doesn’t appear to happen anymore.

“The problem is that there are 36 species of Christmas beetle in Australia, and we do not know which ones (if any) have declined,” she said.

“The goal of our project is to collect the data we need to determine which Christmas beetle species are in trouble so that we can figure out ways to help them.”

Latty said, in a Sydney University news release, that there is just not enough information with the data being too patchy or too geographically sporadic.

“We need to collect data on Christmas beetle populations in order to understand where they are and in what quantities. And we can only do that with the help of the public,” she said.

What Aussies Can Do to Help

The scientists at Sydney University are asking the Australian public to help them perform a population count using the iNaturalist website or app.

iNaturalist allows its users to capture the picture and location of each Christmas beetle they observe instantly. The app also assists in identifying the species of the photographed Christmas beetle.

“Only with this kind of large-scale baseline data, collected by thousands of Australians around the country, will we be able to figure out if they are really declining and, eventually, why,” Latty added.

“We really need the public’s help to track the population of Christmas beetles if we are going to identify which species may be at risk and where large populations still exist.”

Christmas beetles are typically 20–30 mm long and are a member of the scarab beetle family. They appear in Australia from December through to January and are noisy and clumsy fliers, as well as an important food source for native wasps, possums, magpies, and currawongs.

Editor-in-chief of the Australian Journal of Zoology and contract lecturer at the Australian National University, Paul Cooper PhD, told the Epoch Times that the one distinctive feature of the beetle is its colouration, being what is commonly known as a jewel beetle.

Cooper explained that the Christmas beetle received its name because it emerges in the month around Christmas time and makes Australia’s eucalyptus trees look like they have shiny baubles on them, akin to a Christmas tree.

Latty noted that Christmas beetle diversity and abundance are higher on the East Coast of Australia and that the absence of Christmas beetles has become particularly apparent in this area.

“We do not know if declines have been steeper there, but we hope our project will identify regions that have experienced sharp declines,” she said.

Latty said that the most observed Christmas beetle in the study’s database is the Anoplognathus porosus or the “washerwoman” Christmas beetle, which is brown and metallic green in colour.

What is Causing the Decline

Latty said that the main cause of the potential decline in Christmas beetles is suspected to be habitat loss.

“Christmas beetle larvae feed on the roots of Australian native grasses. Much of that habitat has been lost to urbanisation and agriculture,” she said.

“Climate change and pesticide misuse may also play a role.”

However, Cooper said that everybody has their own opinion as to what is causing the changes in Christmas beetle populations.

“The fact that it’s not just in Sydney, where more development is going on, it’s also here in Canberra where clearly development is not to the same extent. It’s unlikely to be just development.”

Cooper said that it’s not known whether the thunderstorms or the rain will have any influence on the beetle’s population numbers because the larvae live underground for at least one to two years.

“The only thing we see is once they come up out of the ground and begin to fly as adults,” Cooper said.

“You often find the cast skins on the side of trees at this time of year, where they’ve climbed up onto a tree and then emerge, but I haven’t seen much of that at all in Canberra yet.”

Why Population Counts Haven’t Been Conducted

Cooper said that the reason studies on Christmas beetle populations hadn’t been conducted is that nobody has funded them, which he attributes to the belief that invertebrates aren’t as important as other animals.

“I mean, the [2020 Australian bush] fires could have had a big effect, but so much more of the money goes to koalas and mammals that nothing is left for things like invertebrates,” he said.

“I think that’s just the reality of the situation because there are many, many groups studying koala responses to fire, but almost nobody is studying the invertebrate response to fire.

“They just don’t have enough money to pay for everything.”

Cooper also noted that very few people have ever done a systematic study of the beetles because it was hypothesized in the late 1980s that Christmas beetles were thought to be causing eucalyptus tree die back.

“But it’s not like eucalyptus have changed much even when we have huge number differences in terms of the population of the beetles,” he said, noting that eucalyptus trees numbers were still declining despite the observed big cycles in Christmas beetle numbers.

Cooper said that the thing about eucalyptus trees is that they’ve coexisted with an enormous range of insects, and they have various compounds that they produce, which protect most eucalyptus from invasion.

“So, the trees can actually protect themselves, if necessary, by producing compounds which the beetles don’t like,” he said.

“And there’s a whole history now of what these compounds are and the eucalyptus which produced them so that those eucalyptus trees are not susceptible at all to feeding by Christmas beetles.

“A lot of those compounds which are found in Eucalyptus that we think give you that nice aroma and things are actually noxious to the beetles.”

The Problem with Eucalyptus Plantations

Cooper said that the problem with eucalyptus tree plantations is that they tend to only grow one type of eucalyptus, like blue gums, and that is always susceptible to insect attacks.

“Any agricultural program is going to always tend to be monocultures, and that’s ideal for insects to come in because they’re all essentially clone plants,” Cooper said.

“That means they don’t have the genetic variation in terms of compounds which protect plants.”

“I think that’s one of the things, is that once you go into agricultural systems, which monocultures are, you have all sorts of different problems that are more difficult to deal with.”

Lily Kelly is an Australian based reporter for The Epoch Times, she covers social issues, renewable energy, the environment and health and science.