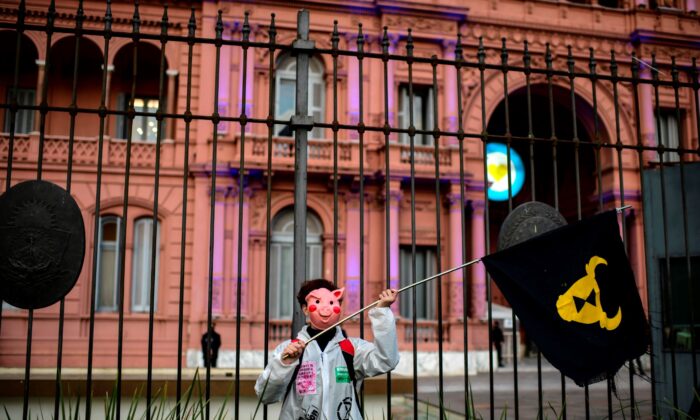 A demonstrator takes part in a protest against an initial agreement between Argentina and China to produce and export pork and demand the protection of the wetlands which are suffering from the worst fires in decades, in front of Casa Rosada Presidential Palace in Buenos Aires, on Aug. 31, 2020. (Ronaldo Schemidt/AFP via Getty Images)

Animal rights activists protested Wednesday in Buenos Aires against a possible agreement with China to install mega pig farms in the country.

Dozens of activists wearing paper bags with pigs drawn on their heads rallied in front of the Chinese embassy shouting slogans against animal abuse.

The treaty negotiation between the two countries considers more than twenty farms in different Argentine provinces to breed pigs and produce 900,000 tons of pork in four years.

The Asian giant has been affected by African swine fever, which forced the slaughter of millions of pigs in its territory.

According to environmentalists, this production model involves millions of liters of water at a time when a large part of the country is suffering from drought.

Activists also claim that the problem would affect the agricultural sectors because of the clearing of thousands of hectares of land to cultivate transgenic maize and soya to produce animal feed and the contamination of groundwater by animals’ feces.

The government of Alberto Fernández announced in mid-2020 that there were talks with China to move forward with this initiative, which would bring the South American country millions in foreign currency.

Amid strong opposition from environmentalists and part of the scientific community, the Argentine foreign ministry reported that the signing of the agreement would be suspended until at least November to bring it into line with regulations on environmental protection, natural resources, and biosafety.