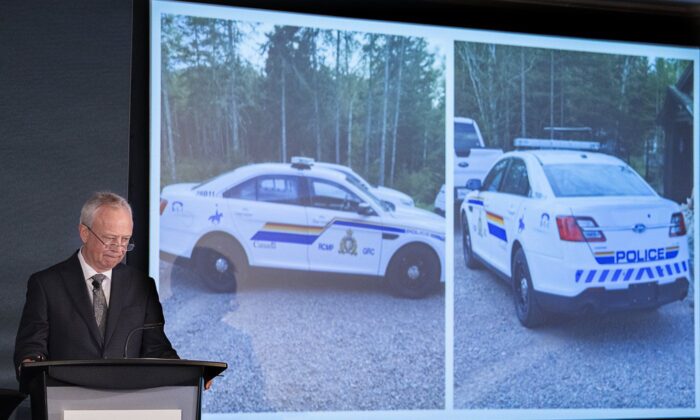 Commission counsel Roger Burrill presents information about the police paraphernalia used by Gabriel Wortman, at the Mass Casualty Commission inquiry into the mass murders in rural Nova Scotia on April 18/19, 2020, in Halifax on April 25, 2022. (The Canadian Press/Andrew Vaughan)

An internal audit of how the RCMP decommissions its vehicles has uncovered a series of shortcomings.

The report was written in response to two cases in Nova Scotia of people using former RCMP vehicles to impersonate police officers, including the April 2020 mass shooting that killed 22 people.

The review found there was inconsistent evidence in RCMP files to prove vehicles were fully decommissioned before their sale by GCSurplus, the federal disposal authority.

As well, the review found that some of the vehicles sold through GCSurplus had some markings and equipment that could identify them as former law enforcement vehicles.

The review team discovered there was no national list of equipment and markings required to be removed from decommissioned RCMP vehicles.

Although decommissioning is addressed in RCMP manuals, the review found that the technical aspects of removing equipment and decals were not documented and vary across the country.

The report says the RCMP’s chief financial officer agrees with the review’s findings and acknowledges there are opportunities to strengthen decommissioning standards and related controls.

Up To 10 Years in Jail For Suppression Of LGBITQ+, Vic Government